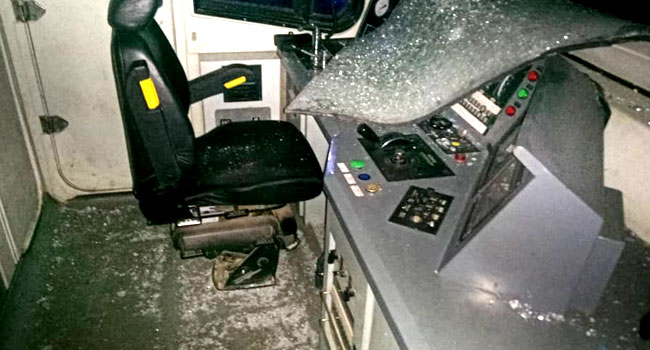 The Nigeria Railway Corporation (NRC) has suspended train services on the Kaduna-Abuja route following the bombing of the rail tracks.

Confirming the incident, the corporation said it was already making efforts to repair the damaged tracks and restore services along the route in the northern part of the counil track on the Kaduna end during an attack on Wednesday night.try.

In a statement on Thursday, the management of the corporation said the explosives damaged the rail tracks somewhere between Dutse and Rijana areas of Kaduna.

Barely a day after the attack, a former lawmaker representing Kaduna Central senatorial district, Senator Shehu Sani, narrated how he escaped an accident as a result of the bombing.

According to him, the attack was carried out by armed bandits who opened fire on the train, targeting its driver.

“Yesternight, bandits attacked the Kaduna-Abuja train,” Senator Sani said in a Facebook post on Thursday. “They planted an explosive that damaged the rail track and shattered the windshield of the train engine.

“They also opened fire, targeting the driver and the tank. It happened between Dutse and Rijana stations. The driver struggled to move towards Kaduna Rigasa station.

“This early morning, I was on board when our train ran over another explosive damaged railing. The train nearly skidded off its track, then we miraculously escaped.”

He advised authorities to suspend all train operations on the Kaduna-Abuja route until the issue was properly addressed.

The attack occurred the same day when Kaduna State Governor, Nasir El-Rufai, received a report on the security issues in the state.

The report indicated that 343 lives were lost in Kaduna in the last three months, as a result of violence.

Of the figure, 193 deaths were reported in the southern region of the state while the central and northern regions recorded 130 and 20 deaths respectively.

However, security operatives killed over 69 criminals and rescued 101 people from the captivity of kidnappers.