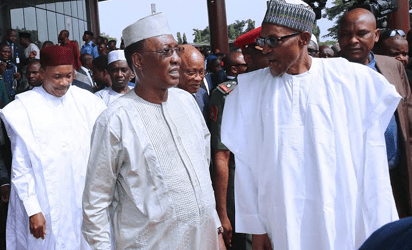 President Muhammadu Buhari is currently holding bilateral talks with the President of Chad, Idriss Deby, at the Presidential Villa, Abuja. President Deby arrived at the State House forecourt about 12:15 pm and was welcomed by his host, President Buhari, who introduced some members of his cabinet to him.

Present at the Presidential forecourt to welcome President Deby are the Minister of Foreign Affairs, Geoffrey Onyeama; the Director-General National Intelligence Agency, NIA, Ahmed Rufa’i; the National Security Adviser, NSA, Major General Babagana Monguno (retd); the Federal Capital Territory, FCT, Minister, Mohammed Bello; and the Nigeria Ambassador to Chad. After the welcome ceremony, the two African leaders went in for bilateral talks in President Buhari’s office. According to a program of events made available to journalists, President Deby is expected to have a media chat after the bilateral meeting.

The Chadian leader, who is standing for reelection for a sixth term in office, might brief the Nigerian leader on the forthcoming Chad’s Presidential election scheduled for April 11, 2021.

Deby has ruled Chad for about 30 years and had kicked off his campaign for a sixth term on March 13, calling for unity after rival protests were banned.