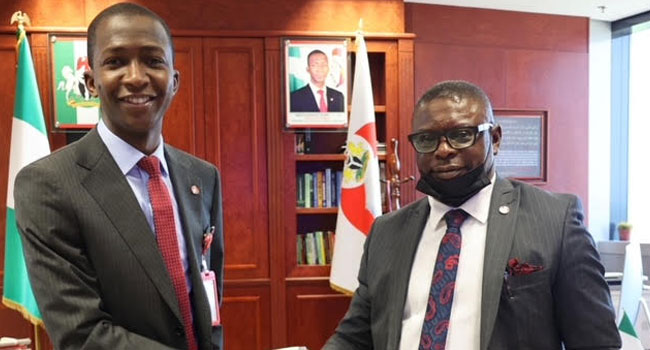 The new Secretary to the Economic and Financial Crimes Commission (EFCC), Dr. George Ekpungu has formally resumed office at the headquarters of the anti-graft agency.

EFCC spokesman, Wilson Uwujaren, disclosed this via a statement issued on Wednesday, noting that he was welcomed by the agency’s Chairman, Abdulrasheed Bawa.

Bawa said he was delighted that Ekpungu is coming on board at a time of fundamental reforms at the EFCC, noting that the Commission, over the last few months, has reviewed and adopted a number of policy documents geared towards improving its efficiency and effectiveness.

The new secretary is among the board members whose appointment by President Muhammadu Buhari on June 21 was recently confirmed by the Senate.

Ekpungu is a law graduate of the Ahmadu Bello University and served as a Commissioner for New Cities Development in Cross River State under Governor Ben Ayade, from 2015 to 2018.

He is expected to serve for five years if he is confirmed by the Senate.

Prior to his new appointment, he was a former EFCC employee and contested for the Ikom/Boki Federal Constituency election in 2019 on the platform of the Peoples Democratic Party in 2019.

He, however, lost the contest.

I Have A Different Method To Address Anambra’s Security Situation, Says Ubah