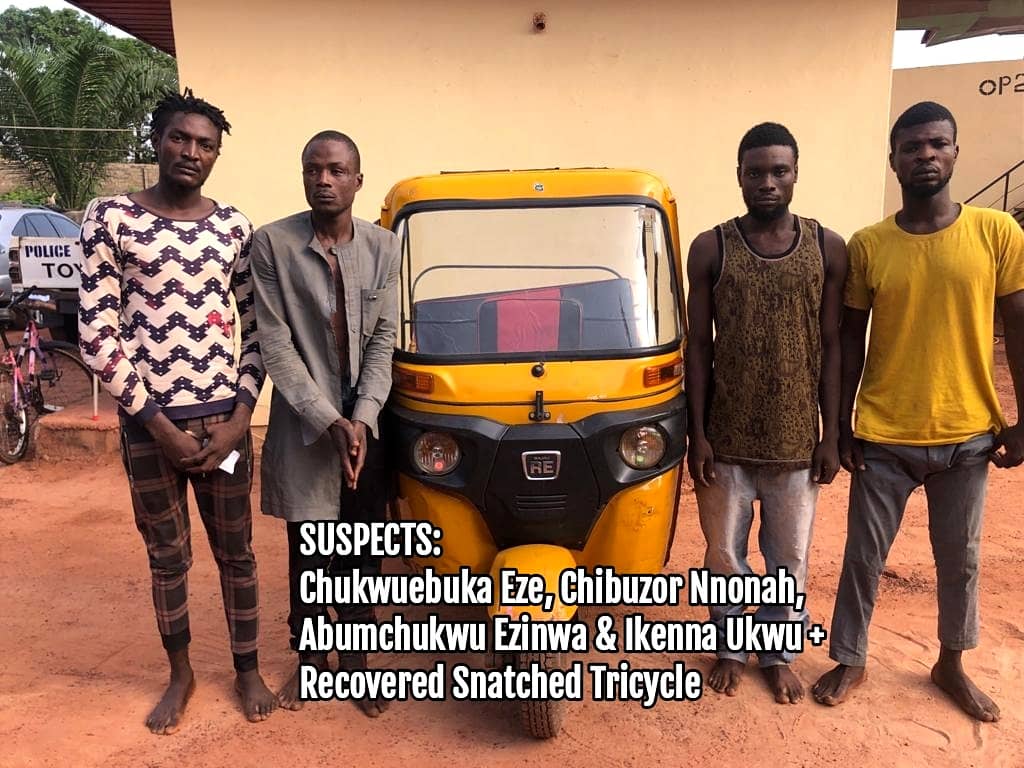 In furtherance of the operational strategies devised by the Commissioner of Police, Enugu State Command, CP Abubakar Lawal, fdc, to contain criminals and their activities in the State, Police Operatives of the Command have between March and April 2022, successfully arrested a total of forty-five (45) male and one (1) female suspects involved the offences of conspiracy, murder, rape/defilement, kidnapping/abduction, armed robbery, unlawful possession of firearm, stealing, vandalism and cultism. The operational activities led to the rescue of four (4) abducted/kidnapped victims, recovery of twenty-five (25) firearms of different makes, thirty-one (31) live ammunition of different calibres, fifty-three live cartridges, three (3) motor vehicles, six (6) tricycles, two (2) motorcycles and other incriminating exhibits.

Accordingly, investigation into most of the cases have been concluded and charged to court, while others are currently being investigated, with brief descriptions of the ongoing investigations relayed as follows:

Sequel to the receipt of a report alleging that on 27/04/2022 at about 2300hrs, one Onyemaechi Okorie aged 19, of Uburu in Ohaozara LGA of Ebonyi State, murdered his male co-worker in a construction site at Independence Layout Enugu, Police Operatives of the Command serving in New Haven Police Division, swung into action and arrested him on the same date. Preliminary investigation revealed that the suspect engaged the deceased in a serious fight and used a rod to hit him on the head. The victim was immediately moved to the hospital for treatment but was later confirmed dead by doctors on duty and the corpse deposited in the mortuary for preservation and autopsy. Meanwhile, the case has been transferred to the State CID Enugu for conclusive investigation and prosecution.

In a different development, on 25/04/2022 at about 1430hrs, Police Operatives serving in Anti-Cultism Squad of the Command, acted on a distress call and arrested one Haruna Abdulazeez aged 22, of New Artisan Market, Enugu and Mohammed Falani aged 32, of Nkporogu, New Layout, Emene Enugu, while their cohorts escaped. The suspects are alleged to have at gunpoint robbed their victims of cash and other valuables, at New Layout, Emene. Their arrest led to the recovery of 1 Pump Action gun with 5 live and 6 expended cartridges, 1 Dagger, 2 tricycles with reg. numbers: ENU 678 WE and NSH 254 UD respectively, cash sum of sixty-five thousand, one hundred and fifty naira (N65,150.00) and 1 Tecno IPOD. The case will be charged to court upon conclusion of the investigation.

The above is in addition to the same Operatives arresting one Chukwuebuka Eze (a.k.a. “Nwarie”) aged 23, Abumchukwu Ezinwa (a.k.a. “Virgin Boy”) aged 26, Chibuzor Nnonah aged 27 and Ikenna Ukwu (a.k.a. “Kasie”) aged 29, on 25th and 20th April, 2022. Their arrest is sequel to the receipt of credible information alleging that the suspects and others at large, snatched a tricycle from their victim at gunpoint on 18/04/2022, at Akegbe-Ugwu Primary School, after beating and tying him up. The suspect confessed to the crime and being members of Vikings Confraternity, while the said yellow-coloured tricycle without reg. number has been recovered. Meanwhile, further discreet investigation that will lead to the apprehension of the fleeing members of the criminal gang and prosecution of the suspects is ongoing.

On their part, Police Operatives serving in Ikirike Police Division of the Command, on 21/04/2022 at about 2130hrs, arrested one Ogochukwu Ugwu aged 24, of MTN Mast, Akwuke Awkunanaw, Enugu South LGA; following the receipt of credible information alleging that him and cohorts at large, have been perpetrating acts of armed robbery within Enugu metropolis. Hence, the Operatives mounted security surveillance on the criminal gang and arrested the suspect along Agbani Road Enugu, while his cohorts escaped. 1 locally-made long gun with 1 live cartridge and the gang’s operational tricycle were recovered; while the case has been transferred to the Anti-Robbery Section of State CID Enugu for conclusive investigation and prosecution.

In another development, Police Operatives serving in Anti-Kidnapping Squad of the Command, on 19/04/2022 at about 1000hrs, arrested one Ogbonna Moses aged 38, of Ibagwa-Aka, Igbo-Eze South LGA, following the discovery of 2 Beretta Pistols, 13 rounds of .9mm and 3 rounds of 7.62mm calibres of live ammunition in a bag of onions he was traveling with from Jos to Enugu on 15/04/2022. Meanwhile, further discreet and conclusive investigation into the case is ongoing.

In a different development, acting on credible information alleging that a group of suspected criminal elements were sighted along Kenyetta, Uwani Enugu, on 14/04/2022 at about 2000hrs, Police Operatives serving in Uwani Police Division, swung into action and on sighting the Operatives, the hoodlums escaped leaving behind a bag. The bag was recovered, searched and 1 AK-47 rifle without magazine, but loaded with 1 round of live 7.62mm calibre of ammunition, was recovered. Meanwhile, discreet investigation to fish out the fleeing suspects is ongoing at the State CID Enugu.

In another development, on 11/04/2022 at about 0330hrs, Police Operatives serving in Anti-Cultism Squad of the Command, acting on credible information, arrested one Oha Nkemjika Kelechi (a.k.a. “DMX”) aged 28, of Umueze, Nkanu West LGA; Peter Orji Ikechukwu (a.k.a. “Don 50”) aged 26, of Ishi-Ozalla, Nkanu West LGA and Okpe Onyekachi (a.k.a. “Certificate”) aged 21, of Obollo-Afor, Udenu LGA. The suspects confessed to being members of Vikings Confraternity and having, along with their cohorts at large, serially robbed traders at Amagugu Road, Garki Market, Awkunanaw Enugu on 05/01/2022. 1 locally-made cut-to-size single-barreled gun with 3 live cartridges, 1 dagger and 1 cutlass were recovered from them, while the suspects will be arraigned and prosecuted in court upon conclusion of investigation.

In an interesting development, on 09/04/2022 at about 2055hrs, Police Operatives serving in Central Police Station (CPS) Enugu, arrested one Juliet Donatus (female) aged 35, residing in Zaria, Kaduna State. Her arrest was as a result of a tip off alleging that she was found attempting to sell a male child at Old Park Enugu. The said child, who is 8 years old, was rescued while the suspect confessed to have stolen the victim from Zamfara State and brought him to Enugu in search of a buyer. The case was transferred to Gender/Anti-Human Trafficking Section of the State CID Enugu for preliminary investigation and has been further handed over to Kaduna State Police Command for conclusive investigation and prosecution.

Furthermore, on 08/04/2022 at about 1100hrs, Police Operatives serving in Enugu Metro Area Command arrested one Nura Mohammed aged 23 while others escaped, sequel to the Operatives swift response to a tip off alleging that some boys in possession of guns were sighted at New Artisan Market, Enugu. 1 Berretta pistol with 6 rounds of live ammunition was recovered from him; while the case is undergoing conclusive investigation at the Firearm Section of the State CID Enugu.

Similarly, Police Operatives serving in Uwani Police Division, on 31/03/2022 at about 2120hrs, intercepted in a tricycle and arrested one Chisom Ikechukwu aged 23, of Amechi Awkunanaw, Enugu South LGA. His arrest led to the recovery of 1 cut-to-size double-barreled gun with 1 live and 1 expended cartridge, 1 knife, 1 Samsung Android phone and 1 Police beret. Also recovered is the tricycle with reg. number: ENU 120 VG he was operating. Meanwhile, the case has been transferred and is undergoing conclusive investigation at the Anti-Robbery Section of the State CID Enugu.

Also, in continuation of a case of conspiracy and kidnapping, Police Operatives of the Command serving in the CP Monitoring Unit, between 24th and 22nd March, 2022, arrested one Oko Chukwudi (a.k.a. “Anka-Dede”) aged 27, Ifeanyi Eze (a.k.a. “Abrinanwa”) aged 36 and Sunday Ede Aneke (a native doctor a.k.a. Aneke-Ikenga) aged 34, all of Akpugo, Nkanu West LGA, for being members of the criminal gang alleged to had conspired and kidnapped one Amechi Oguama (male) on 20/10/2021. It will be recall that three (3) other members of the said kidnapping gang namely: one Chioma Uwa (female and a.k.a. “Dr. Happiness”), Chekwube Nwatu (male and a.k.a. “Cheche”) and Emeka Uwa (male a.k.a. “Akimbo”), had earlier been arrested, arraigned in court and remanded in Correctional Custodial Centre. All the newly arrested suspects confessed to having been actively involved in the kidnapping of the said victim and the receipt of ransom of over ten million naira (N10,000,000.00) by the criminal gang, while 1 Berretta pistol with 1 .9mm round of live ammunition was recovered from them. Meanwhile, the suspects will be further arraigned in court and prosecuted alongside the previous suspects, once supplementary investigation into the case is concluded.

To this end, the Commissioner, while applauding the support received from security stakeholders, which made the achievement of these modest operational breakthroughs possible, has commended and charged the Operatives to sustain the tempo in the Command’s quest to rid the State of unrepentant criminals and their activities.

The CP further calls on citizens of the State to remain law-abiding, vigilant and continue to support the Police by promptly reporting criminals and their activities to the nearest Police Station or by calling the Command’s emergency hotlines on: 08032003702, 08075390883 or 08086671202. They can alternatively send e-mails to contact042ppro@gmail.com and/or report security incidents using the Upgraded NPF Rescue Me App, which can be downloaded on Android and iPhone App Stores.

The 9th Senate and House of Representatives

Umahi Made The Right Choice To Join APC – Buhari