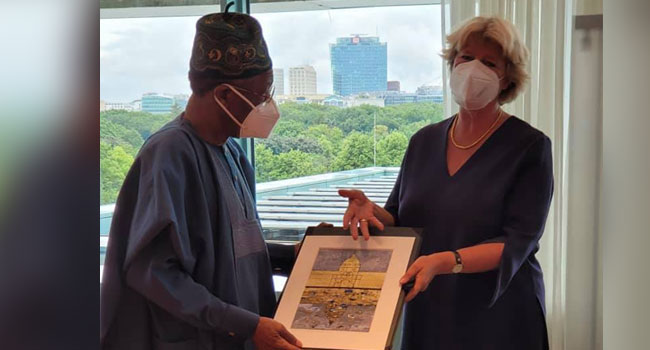 The Minister of Information and Culture, Lai Mohammed, on Saturday said the Federal Government will be responsible for taking possession of the 1,130 Benin bronzes to be returned by Germany.

“The Federal Government is aware of the widely reported controversy on who will take possession of the Benin bronzes when they are returned from Germany,” Mr Mohammed said on Saturday at a press conference in Lagos.

The return of the bronzes, looted by Britain from Benin-city in the 19th century, had recently generated some controversy in Edo State.

While the Oba of Benin wants the artefacts returned to the Benin Royal Museum, Edo State Governor Godwin Obaseki has said they will be kept in “a transformational museum to be built in Benin City.”

Mr Mohammed noted that the Federal Government would take possession while respecting the culture where the art originated from.

“Let me state clearly that, in line with international best practices and the operative conventions and laws, the return of the artefacts is being negotiated bilaterally between the national governments of Nigeria and Germany,” he said.

“What we are saying in essence is that the Federal Government will take possession of these antiquities because it is its duty to do so, in line with extant laws.

“But we have always exercised this right in cognizance of that culture that produced the art works.”

Although he did not state where the artefacts will be eventually kept, he thanked Governor Obaseki and the Oba of Benin for their work in the repatriation of the bronzes.

Mr Mohammed, who recently led a delegation to Berlin to discuss the modalities for the proposed return, said the agreement will be signed by December 2021 with repatriation to be concluded by August 2022.

He added that the return of the artefacts will be unconditional.

“We made our Germany counterparts realise that Nigeria is averse to attaching preconditions to repatriating the Benin bronzes. We made it clear that these are our properties and it is not proper to give us conditions for releasing them.

“We therefore agreed that the release will be unconditional, neither will it be staggered.

“We have decided that the repatriation of the artefacts should not be the end of an era but rather the beginning of a new vista of stronger relations, pivoted by cultural diplomacy, between Nigeria and Germany.”

Read his full statement on Saturday below:

TEXT OF THE PRESS CONFERENCE BY THE HON. MINISTER OF INFORMATION AND CULTURE, ALHAJI LAI MOHAMMED, ON THE EFFORTS BY THE FEDERAL GOVERNMENT TO REPATRIATE LOOTED/SMUGGLED ARTEFACTS FROM AROUND THE WORLD….IN LAGOS ON SATURDAY JULY 17TH 2021

Good morning gentlemen and thank you for once again honoring our invitation. We have organized this press conference to update Nigerians on the efforts being made by the Federal Government to repatriate looted and smuggled Nigerian artefacts from around the world. We also believe that you, as critical stakeholders, must be carried along in these efforts.

2. Recall, gentlemen, that on Nov. 28th 2019, I announced, at a press conference here in Lagos, the launch of the Campaign For The Return and Restitution of Nigeria’s Looted/Smuggled Artifacts from around the world. I said that with the launch, we are putting on notice all those who are holding on to Nigeria’s cultural property anywhere in the world that we are coming for them, using all legal and diplomatic instruments available. Less than two years after that announcement, I can report back to Nigerians that our efforts at repatriating Nigeria’s looted artefacts are achieving positive results. The work ahead remains tough and daunting, but we will not relent until we have repatriated all our stolen and smuggled antiquities. These artefacts are so cherished all over the world and we realize that if they are returned to Nigeria and properly exhibited within and outside the country under our control, they stand to increase the influx of tourists to our nation and earn us good money. Of course, these timeless and priceless pieces of work are an important part of our past, our history, our heritage resource, and allowing them to sit in the museums of other nations robs us of our history.

3. Gentlemen, even though not everyone in possession of these artefacts is willing to return them, we remain undeterred as we have deployed all legal and diplomatic means and we have been recording
successes in our quest for repatriation. Here are some of the successes we have recorded since that press conference in 2019:

– In October 2020, The Netherlands returned a highly-valued 600-year-old Ife Terracotta.

– In March 2021, the University of Aberdeen in Scotland agreed to return a Benin Bronze from its collections. We shall take possession of this in October this year.

– The University of Cambridge in the United Kingdom has also agreed to return a disputed Benin artefact. We will soon commence the procedure for the repatriation of this highly-valued piece.

– We have also secured a date in October 2021 for the repatriation of antiquities from the Metropolitan Museum in New York. These antiquities consist of two important Benin Bronzes and an exquisite
Ife Bronze head. We are currently before the Intergovernmental Committee for Promoting the Return of Cultural Property to it Countries of Origin or its Restitution in case of Illicit Appropriation (ICPRCP) in Paris, where we have instituted a claim against a Belgian who wanted to auction an Ife Bronze head valued at $5 million, at least. This Ife Bronze antiquity has been seized by the London Metropolitan Police, pending the decision on who the true owner is. Of course, we all know that the true owner is Nigeria.

REPATRIATION OF LOOTED ARTEFACTS FROM GERMANY
4. The most remarkable progress in our quest to repatriate our looted artefacts has been recorded in Germany, which is currently working with us for the repatriation of 1,130 Benin Bronzes to Nigeria. As you are aware, I recently led a high-level Nigerian delegation to Berlin, Germany, to iron out the modalities for the repatriation. During the trip, our delegation met with Prof. Monika Grutters, the German Minister of State for Culture, who has
responsibility for antiquities; the German Foreign Minister, Mr. Heiko Maas, the Secretary of State in the German President’s office, Mr. Stephen Steinlein, and Harmann Parzinger, President of the Prussian Cultural Heritage Foundation, which is the centre of the German culture establishment, and his team, I also met with the Directors of at least 20 major museums. The negotiations were tough but fruitful. We have agreed that there is no going back on the issue of returning the Benin Bronzes.

5. At the meetings in Germany, I insisted, and it was resolved that provenance research on the Benin Bronzes cannot and must not delay their return, since the origin of Benin objects is not a subject of dispute as such objects are only associated with the Benin Kingdom. On the German authorities’ proposal to return a ‘substantial part’ of the Benin Bronzes. I have asserted the stand of the Nigerian government by
demanding full and unconditional release of the artefacts. Concerning recording the artefacts in 3D formats for posterity and academic sake under the ‘digitalbenin’ project, of which we are a part. I have told the Germans that this work of digitalizing the Benin Bronzes must not delay the return of the artefacts and that issues related to copyrights ownership and other rights over the digitalized objects will be discussed soon.

7. It must be noted, however, that the meetings in Germany were not only about repatriating these objects. We have decided that the repatriation of the artefacts should not be the end of an era but the beginning of a new vista of stronger relations, pivoted by cultural diplomacy, between Nigeria and Germany. In this regard, there are other benefits accruing to Nigeria from the ongoing talks. There will be archaeological training for Nigerians. The Nigerian side and the German side agreed to Nigeria’s proposal to use the repatriated artefacts and other works of art to inspire Nigeria’s Creative Industry towards realizing its high potential. For this and
other purposes, it was agreed that the Germans will facilitate the establishment of an academy in Nigeria.

CONTROVERSY OVER THE POSSESSION OF THE RETURNED ARTEFACTS
8. Gentlemen, the Federal Government is aware of the widely-reported controversy on who will take possession of the Benin Bronzes when they are returned from Germany. Let me state clearly here that, in line with international best practice and the operative Conventions and laws, the return of the artefacts is being negotiated bilaterally between the national governments of Nigeria and Germany. Nigeria is the entity recognized by international law as the authority in control of antiquities originating from Nigeria. The relevant international Conventions treat heritage properties as properties belonging to the nation and not to individuals or subnational groups. For example, the 1970 UNESCO Convention, in its Article 1, defines cultural property as property specifically designated by that nation. This allows individual nations to determine what it regards as its cultural property. Nevertheless, the Nigerian state – through the Federal Ministry of Information and Culture and the National Commission for Museums and Monuments – has in working assiduously over the past years to repatriate our looted artefacts carried along our important
traditional institutions and state governments

9. What I am saying in essence is that the Federal government will take possession of these antiquities, because it is its duty to do so, in line with the extant laws. But we have always exercised this right in cognizance of that culture that produced the art works. That is why the Ministry of Information and Culture and the National Commission for Museums and Monuments have always involved both the Edo State government and the Royal Benin Palace in discussions and negotiations that have now resulted in the impending return of these antiquities. Please note that we are not just involved in the repatriation of Benin artefacts. We are also working on repatriating Ife Bronzes and Terracotta, Nok Terracotta, Owo Terracotta, the arts of the Benue River Valley, the Igbo Ukwu, the arts of Bida, the arts of Igala, Jukun etc. Recall, gentlemen, our efforts over the Igbo statues that were auctioned at Christie’s in Year 2020, and the fact that we took the British and Belgian authorities to ICPRCP in 2019 over an Ife object.

10. Finally, I want to most sincerely commend the Government of Germany for taking the lead in the global efforts to repatriate all artefacts that were looted from Nigeria and indeed from the African continent. As I said during the meetings in Berlin, we see Germany as a leader in the efforts to take practical steps to repatriate our stolen artefacts, and we hope Germany will sustain that lead. I also want to thank Governor Godwin Obaseki of Edo State, who was with us all through the tough negotiations in Berlin, and His Royal Majesty the Oba of Benin, who sent the Benin Crown Prince, His Royal Highness Ezelekhae Ewuare, to be a part of the Nigerian delegation to Berlin. We thank all Nigerians, especially the media, for their support for our efforts to repatriate all our looted artefacts.

11. Gentlemen, I thank you for listening. I will now take your questions.

‘I Am Still In The Race,’ PDP Candidate Reacts To Exclusion From INEC List