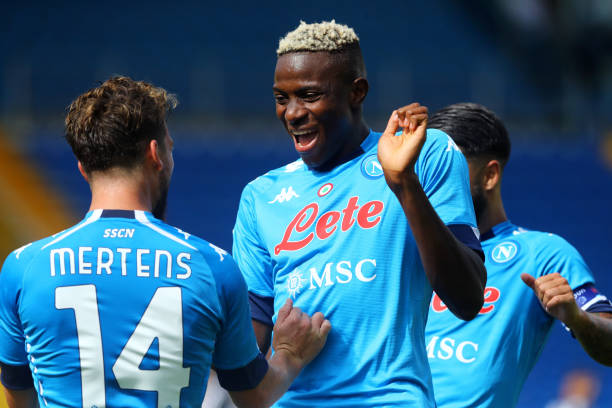 Victor Osimhen continued his fine goalscoring run with his fourth Serie A goal of the season in Napoli’s 2-0 victory over Cagliari on Sunday.

After his brace against Sampdoria on Thursday, Osimhen got Luciano Spalletti’s side off to a flying start at the Stadio Diego Armando Maradona with his 11th-minute opener courtesy of Piotr Zielinski’s assist.

The Nigeria international has now scored at least a goal in his last four matches for Napoli across all competitions.

Later in the second half, Lorenzo Insigne sealed maximum points for the hosts with his effort from the penalty spot in the 57th minute.

The victory powered Napoli to the top of the Serie A table with an unblemished record of 18 points out of six games – two points above second-placed AC Milan.

Osimhen was in action for 77 minutes before he was replaced, while Cameroon midfielder Andre-Frank Zambo Anguissa and Senegal defender Kalidou Koulibaly played from start to finish for the Parthenopeans.

Cagliari, on the other hand, introduced Senegal’s Keita Balde as a 68th-minute substitute but his contributions were not enough to help them grab their first league win of the season. They are 19th in the league table with just two points from six matches.

Osimhen recently revealed the secrets behind his fine form in front of goal this campaign after the challenges he faced in his debut season in Italy.

“It was important for me to start the season well and I want to thank the coach for his confidence in me. I’m honoured to play for this club,” the former Lille star said. “Last year, I had Covid and then got a bad injury.

“I’m in good shape this season. I’m training consistently and I’m listening to the advice the coach gives me and the help I get from the team,” he added. “I’m pleased with what I’m doing but I know I need to continue working hard.

“We all need to continue down this track.”

Osimhen will shift his attention to Thursday’s Uefa Europa League outing against Victor Moses’ Spartak Moscow with the aim of helping Napoli extend their winning streak.

After the European outing, Spalletti’s men visit Fiorentina for their next league fixture on October 3.