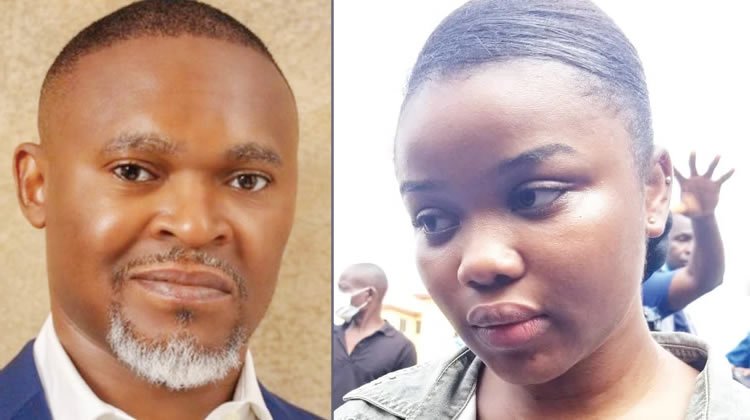 The Lagos State Government has filed murder charges against Chidinma Ojukwu and another person, Adedapo Quadri, for the murder of the Chief Executive Officer of Super TV, Usifo Ataga.

It was gathered this on Monday when Chidinma was brought before a Chief Magistrate court sitting in the Yaba area of Lagos.

The prison wardens attached to the court barred journalists from accessing the area through which she arrived, dressed in a black hooded jumpsuit around 9am. They also did not allow journalists access to the area when she left the courtroom.

Counsel to the police, Cyril Ajiofor told Magistrate Adeola Adedayo that the police had received legal advice from the office of the Directorate of Public Prosecution(DPP) on the case.

A copy of the DPP’s advice says that after careful consideration of facts available in the case file, a prima facie case of conspiracy to murder, murder, and conspiracy to commit felony exists against the 300 level Mass Communication student of the University of Lagos, Chidinma and Quadri.

A prima facie case of stealing exists against Chidinma alone.

The DPP also established the offence of having possession of a stolen item against Chidinma’s sister, Egbuchu Chioma from whom the deceased’s iPhone 7, was said to have been recovered.

As a result, the Director of Public Prosecution, Mrs Olayinka Adeyemi, has filed charges against the three suspects at the Lagos High Court, but has yet to get a date for the hearing of the case.

The DPP will prosecute Chindinma and Quadri “for the offences of conspiring to murder, murder, conspiracy to commit felony to wit: forgery, forgery and making documents without authority contracts to Sections 233, 222, 411, 363, and 370 respectively of the Criminal Law, Cap. C17 Vo.3 Laws of Lagos State, 2015.”

Also, the DPP will prosecute Chindinma’s sister Chioma “for the offence of having possession of thing (sic) reasonably suspected to have been stolen contrary to Section 329 of Criminal Law, Cap. C17 Vol.3 Laos of Lagos State, 2015”. The DPP in her advice cleared 11 other suspects and asked that they be released on the grounds that no offence had been disclosed against them in respect of the case.

Based on this information, Magistrate Adedayo also discharged Chidinma’s father, Ojukwu Onoh and four others who had initially been arraigned by the police for alleged obstruction of justice and failing to report a crime to the law enforcement agencies. Magistrate Adedayo recommended Chidinma for trial at the Lagos High Court as the magistrate court lacks the jurisdiction to entertain a murder charge.

She, however, ordered the further remand of Chidinma and the two others to be tried and adjourned till Sept 29 to await further information from the DPP as to the status of the case at the High Court.

The Lagos State Government’s move is the latest in the murder saga which began in June.

Police authorities in the state had paraded Chidinma for allegedly murdering Ataga.

The media mogul was found in a pool of his blood with multiple wounds on his body after he was reportedly stabbed to death at a hotel where he lodges in the Lekki area of Lagos.

Chidinma had initially admitted to murdering Ataga, explaining that she did so in self-defence after the Super TV CEO allegedly attempted to rape her.

But in a swift turn of events, the student denied killing the victim.

“As I was leaving the apartment, he stood up to lock the door. When I came back, I knocked but there was no response. Then I opened the door and realized it wasn’t locked,” she said, weeks after the murder story made headlines across the nation.

“The duvet was on the floor and pillows. The couch was facing the door and the bed was stained with blood and the floor where he was. Music was on, the TV was on. The room was in disarray like someone broke in.

“Then I saw him on the floor, I didn’t know what to do. I was afraid. I thought if I raised an alarm I would be arrested because we were the only people in the room.”

Days later, the National Assembly also waded into the matter, asking the police to ensure the accused does not die in their custody.

Representative Tolulope Sadipe, who raised the motion as a matter of urgent public importance, expressed worries over the media trial and public parade Chidinma had been subjected to.

The lawmaker argued that the accused could become depressed and eventually commit suicide.