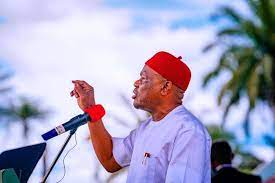 Rivers State Governor, Nyesom Wike has charged members of the Peoples Democratic Party (PDP) to respect the zoning arrangement of the party.

Recall that former Governor of Kano State, Rabiu Kwankwaso, who is interested in contesting the 2023 presidency had said on Monday that the presidency should not be zoned to the South.

However, Wike, who charged governors elected under the platform of the PDP to  unite in taking decisive decisions on issues affecting the party,  described  party members, especially “those  who are saying the presidency should not be zoned”, as agents of the All Progressives Congress (APC).

Wike spoke on Tuesday when he visited Governor Seyi Makinde of Oyo State to commiserate with him on the death of the Olubadan of Ibadan land, Oba Saliu Adetunji.

“Forget about the people saying there should not be zoning. It is just a distraction. For me, those doing that are agents of the APC and they are not helping the party. Whichever way, we must sit down and make the best decision that will make Nigerians happy; that will make us win the election.

“There is no basis for anything we do that won’t make us win the election, because it means we still want Nigerians to suffer and they cannot just continue to suffer. They have suffered enough in the hands of APC and God will not forgive PDP if we don’t rescue Nigerians.

Wike said he and others had come to let Makinde know that it was important for them as a party to unite a lot of Nigerians who were waiting for the PDP and that the party could not afford to lose this opportunity.

“The governors must be united. It does not matter who would be the party’s presidential candidate. Once the party and governors are united, I can tell you that the victory is on our way. So, the unity of the governor is key to making sure the party gets it right.

“It was the way we were united that made us produce the National Chairman and the best National Convention, which got Nigerians surprised. We should also do the same by working hard to produce the presidential candidate, who will win the election for the PDP. This is because if we lose it this time around, Nigerians will not be happy with us.

“We cannot allow this evil they call APC to continue and that is why they cannot put themselves together. So, God has used people like you to unite the party and to organise the best convention. Mine is going around telling our people to let us work together as a party so that we will be able to stand APC in the next general election. We must all rally around anybody the party produces to be the presidential candidate and make sure that we win the election”, he said.

Wike further charged Makinde not to be distracted by criticisms, urging him to continue to do well, while also charging his aides and residents of the state to keep supporting him.

“People must criticise, even in a family, it happens. So, be focused and don’t be distracted. Continue to do well. This is a public office and not the same with a private business but that experience has helped you a lot to move the state forward.

“I also want to urge your aides to continue to give you the needed support. Most people fail because of their aides, because they are not committed. But for you to have travelled for some days and things still worked, it means your aides are committed and I want to commend you all. You are a part of those that have changed Oyo State”, he added.

“We can only pray for more strength and good health so that you will continue to render your service, at least, till the end of your tenure in Rivers State.

“For us in Oyo State, we are following in your footsteps by giving dividends of democracy to our people. It is all about serving the people.

FCTA: Unvaccinated Workers Won’t Be Allowed into Office from Jan. 17