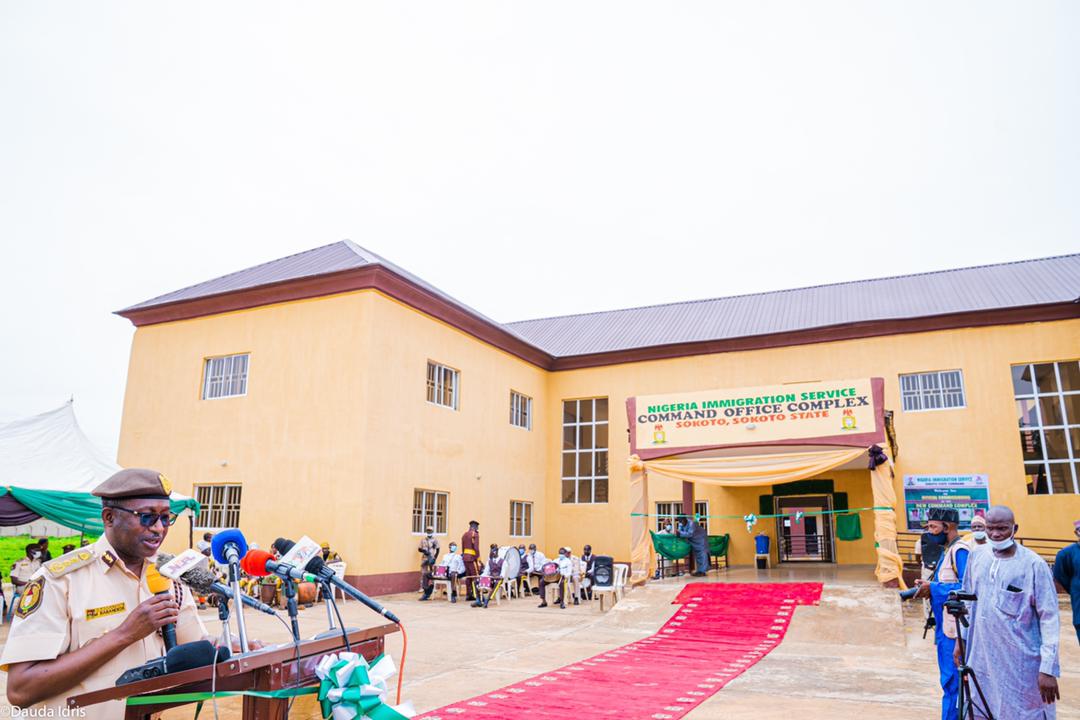 The Governor of Sokoto State, Aminu Tambuwal, has congratulated the Nigeria Immigration Service (NIS) for constructing an ultra-modern office complex for the Sokoto State Command in the State Capital.

Speaking during the commissioning of the Complex, the Governor described the decision by the management of the Service to build a new State Command Complex for its Officers and Men as not only very timely but strategic.

He noted that the edifice will offer a conducive  environment for the Service stressing that the State recognizes the crucial role of the NIS in the national security architecture.

“As a State with very vast international borderline, we put high interest in any effort that would make Officers and Men of the Immigration Service comfortable in the State to do their job and this is the reason why we commend the management of the Service for completing the project”, he noted.

While applauding the efforts of Comptroller  General of Immigration, Muhammed Babandede for the digitization of NIS systems and operations, the Governor specifically appreciated the choice of Ilella Border Control Post in the State as the Pilot Centre for the e-Border project. He stated that the effort will significantly address the security concerns at the Land Borderlines in the State. He affirmed the State’s readiness to continue to support the Service in any way possible for enhanced service delivery to the good people of Sokoto State and the country at large.

Earlier in his remarks, the Comptroller General of Immigration Muhammad Babandede MFR reiterated the Service’s uncommon commitment to the welfare of the workforce. He stated that upon assumption of Office as Comptroller General, he noticed a huge infrastructural deficit in the system and got committed to building at least two Command Office Complexes yearly. This has been pursued very vigorously till date with the Sokoto Command Complex being the twelfth of such Buildings already delivered while six others are currently in various stages of completion, he said.

Before now the Sokoto State Command had been operating from the Federal Secretariat in the State for decades.

He thanked the Federal Government for the delivery of the NIS Technology Building which currently houses the e-Border project.

“As I speak, we can monitor real time online, all movements and activities at Ilella Border Control Post. The Illella Control Post is our e-Border Pilot Centre and to this effect, we have upgraded it to a full Command Structure under the supervision of a Comptroller of Immigration”, he noted.

He added that the e-Border project remains the most suitable and modern approach to meaningfully address the nation’s Border Security concerns especially at the Land Borders.

The Comptroller General further affirmed management’s renewed commitment to profound reform efforts that would deliver the most effective and efficient Migration Management agency to the country.

He applauded the Governor for the warm reception accorded his team at the Government House and expressed appreciation for the Governor’s gracious acceptance to personally commission the Office Complex.

He used the opportunity to thank the Minister of Interior, Ogbeni Rauf Aregbesola for providing good leadership to the Ministry and its agencies, especially Nigeria Immigration Service. He equally thanked President Muhammadu Buhari, GCFR for investing heavily in NIS which has indeed positioned the Service very strategically in the country’s security system.

Dignitaries at the event include the Deputy Governor, Hon. Manir Mohammad Dan-Iya, Secretary to the State Government, Saidu Umaru Ubandoma, other State Government officials and representatives of military and paramilitary agencies in the State.