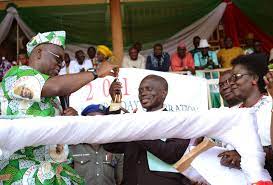 It was a celebration galore for teachers in Ekiti and Ogun states as their governors gave out new cars, houses and cash to the best teachers in the states for 2021.

Setting the tone for the celebration was Ekiti State Governor, Kayode Fayemi, who presented two brand new Kia cars to the best teachers in primary and secondary schools in the state.

The teachers are Olusonji Bamidele, from Isan Secondary School and Jimoh Azeez, from Ansarudeen Nursery and Primary School, Otun Ekiti.

Fayemi also presented cash awards and freezers to some teachers who were outstanding in their teaching profession.

The governor restated that as a lover of education and a teacher-friendly government, teachers’ welfare entitlement and promotion remained sacrosanct to his government.

His Ogun State counterpart, Dapo Abiodun, yesterday announced the donation of a two-bedroom detached bungalow to a teacher in Japara Junior Secondary School, Ijebu Igbo, Mr Kehinde Oladapo, as the overall best teacher in the state for 2021.

The house is located at the state-owned estate, Kobape, Obafemi Owode Local Government.

Oladapo also received a donation of N2.5million for being the overall best teacher in the state.

Abiodun announced this while addressing members of the Nigerian Union of Teachers (NUT) and the Academic Staff Union Secondary Schools (ASUSS), at the Obas complex in Abeokuta.

The governor said the state government instituted a yearly best teachers’ awards scheme in different categories to appreciate outstanding teachers in the state and those who had distinguished themselves in the course of carrying out their duties.

Earlier, the chairman of NUT in the state, Abiodun Akinola, urged the government to quickly released unremitted cooperative deductions which had been adversely affecting the lives of teachers and their families.

Akinola, represented by the state secretary, Samson Oyelere, appealed to the governor not to take the welfare and motivation of teachers in the state with levity.

Meanwhile, in Niger State, secondary school teachers under the umbrella of Academic Staff Union of Secondary School have called on the Niger State Government to renew efforts to secure schools against armed men attacks.

The chairman of the Union, Daniel Angulu, said previous attacks on schools in the state still scared teachers from going about their normal duties as bandits have continued to operate in some parts of the state.