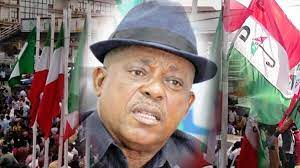 The Appeal Court sitting in Port Harcourt Rivers state will on Friday deliver ruling on a suit by the embattled former national chairman of the Peoples Democratic Party(PDP) Uche Secondus against the party.

The leader of the three-man Appeal panel, Justice Haruna Tsamani, reserved the judgement shortly after parties made their submissions on Thursday.

Secondus is seeking the order of court to stop PDP national convention slated for Saturday, October 30.

Speaking through his counsel, Tayo Oyetubo (SAN), he urged the court to preserve his rights as the National Chairman of the party by granting his application and restrain PDP from holding the convention pending the determination of the substantive suit.

He told the court that his tenure of office expires on December 8, 2021, adding that if the court does not grant his application, the party would go ahead and hold the convention as well as elect new leaders, hence destroying his right as national chairman permanently.

“I urge the court to preserve the case and the right of the national chairman, having regard for the facts of the case, the right of jurisdiction of the court to be able to deliver judgement on the main appeal.

“The decision of the court today, will determine whether or not the party convention will hold, if the application is not granted, my right as national chairman will be permanently destroyed,” he appealed.

However, the counsel for the first to fifth respondents, Henry Bello, vehemently objected, arguing that the applicant deviated from the facts of appeal in all his grounds in the amended notice of appeal, insisting that the application cannot be granted.

“The prayers made in the application by the plaintiff cannot be granted, in that the whole gamut of the five grounds of the amended notice of appeal has no iota of illusion to the national convention of the sixth respondent application.

“The appeal is a clear deviation from the fact for which this appeal was instituted, which is the national convention.

‘I urge the court to dismiss the application and award cost to the applicant for wasting the time of court,” he said.

Other respondents in the matter aligned with Bello in the submission to dismiss the case for lack of competence.

Anambra Guber: Abaribe Canvasses Support For Ozigbo, Says He Will Be Leading Voice For Igbo