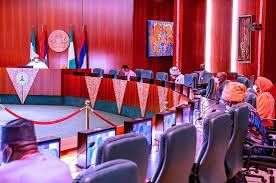 President Muhammadu Buhari in audience a delegation from the Nigeria Christian Pilgrims Commission (NCPC), led by Executive Secretary of the Commission, Rev. Yakubu Pam, at the Council Chambers, in  Abuja on Thursday

The Federal Executive Council (FEC) has approved contracts worth a total sum of N27.4 billion for projects in the Works and Housing, and the Federal Capital Territory (FCT) ministries.

The council presided over by President Muhammadu Buhari at the presidential villa, Abuja on Wednesday also approved the establishment of a Federal University of Health Sciences.

Similarly, it approved the raising of a bill for the enactment of the Civil Defense, Corrections, Fire, Immigration Services Board (CDCFIB).

Ministers of Works and Housing, Babatunde Fashola; FCT, Mohammed Musa Bello; Interior, Mr Rauf Aregbesola; and the Special Adviser to the President on Media and Publicity, Mr. Femi Adesina, briefed correspondents of the outcome of the meeting

Fashola said his ministry presented two memoranda with both of which were approved council.

According to him, FEC approved the appointment of consultants to supervise the ongoing construction of the Bodo-Bonny Highway in Rivers state, as well as the construction of the Idah-Nsukka Road, linking Kogi and Enugu states, putting the cost of both projects at N27.067 billion.

He said: “On behalf of the Ministry of Works and Housing, I presented two memoranda to the council. The first was to appoint the consultant to undertake the supervision consultancy for the construction of the Bodo-Bonny Road and bridge, which was previously awarded by the Council. So, we now have a consultant helping to supervise what the contractor is doing.

The Minister of the FCT, Bello, said his ministry got approval for the procurement of a light-duty towing truck at the cost of N286,302,277.50, which he said is expected to be made available with eight weeks.

In his remarks, the Minister of Interior, Mr Aregbesola, said the council approved the repeal of the Immigration and Prison Services Board Act and got the approval for the enactment of the CDCFIB.