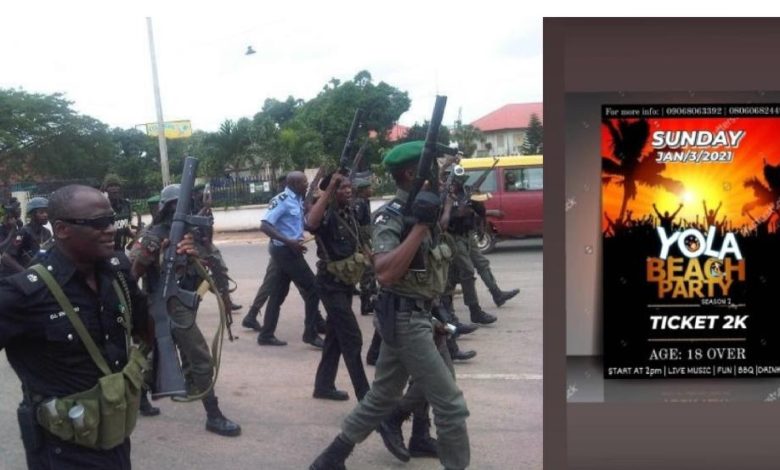 The police in Adamawa state, on Monday, said it could no longer pursue the arrest of organizers of a botched Yola beach party, which some persons had complained would promote nudity and immorality.

The police in the state said that it could not arrest those behind the botched beach party because the party never held anywhere in the state.

DSP Suleiman Nguroje, the Public Relations Officer of the Adamawa State Police Command, on phone, said that the search by police to trace the organizers and the venue of the beach party proved futile.

He explained that the police was called to step in following complaints by some persons in the community, which drew the attention of the police commissioner, that the beach party scheduled for Sunday, January 3, would promote nudity and immorality in the state.

Nguroje, who said a search by the police to locate the organizers up till Monday had been futile, also added that arrest of the organisers was no longer tenable because the planned beach party did not hold anywhere in the state and for that reason could not establish any crime against the organisers.

He said, “When we saw the invitation through the social media, detectives were deployed to search for the organizers, trace and locate the venue. Up till this morning, there’s no arrest proper. Once anybody has not committed any crime I don’t see any reason for us to arrest them.”

It would be recalled that outrage had greeted the idea of a beach party billed to be staged on Sunday, in Adamawa, North-East Nigeria.

The event would be the second to be staged. Although no venue was indicated on the invitation, participants who are expected to be above 18 would have to pay a gate fee pegged at N2,000.

Baba Musa, one of the residents, in Jimeta who voiced strong opposition against the beach party, warned that allowing such a party to be staged would incur God’s wrath.

The police in the state said it was drawn to step into the case following complaints by concerned residents who were disturbed that the event would promote nudity and immorality.