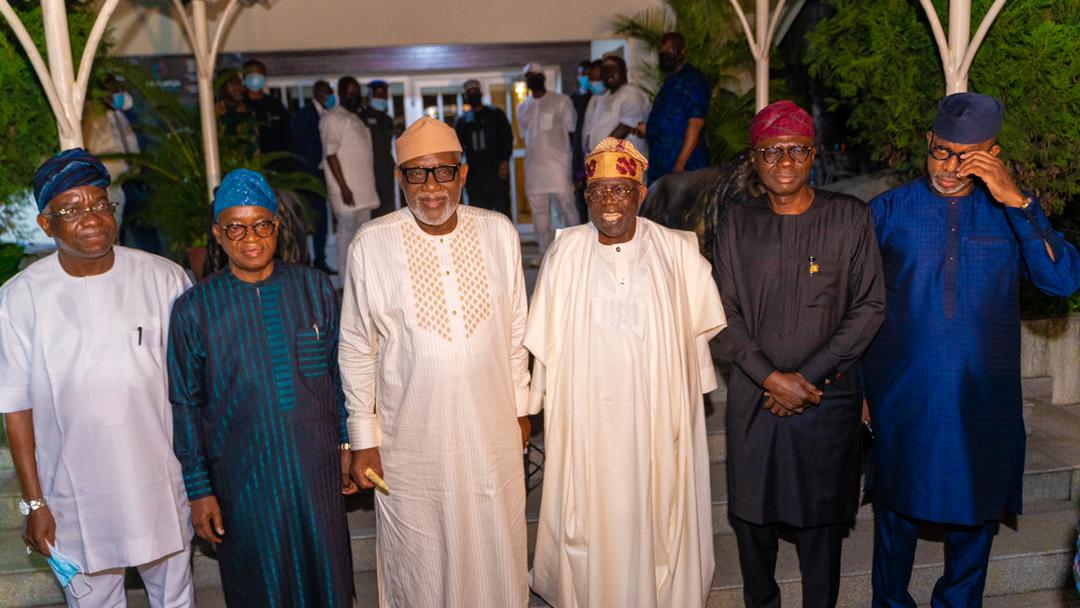 Governor Oluwarotimi Akeredolu of Ondo State, Chairman of the South West Governors’ Forum, on Wednesday explained why Governor Kayode Fayemi of Ekiti State was absent during the visit of the forum to former Lagos State Governor and National Leader of the All Progressives Congress, APC, Asiwaju Bola Ahmed Tinubu.

According to Akeredolu, his Ekiti State counterpart was unavoidably absent due to an urgent schedule.

Akeredolu had on Tuesday led his South West counterparts on a courtesy visit to Tinubu at his Bourdillon, Ikoyi residence, Lagos State, after his return to the country from the United Kingdom.

Following the reactions trailing the absence of Fayemi who was said to be eyeing the presidential ticket of the APC ahead of 2023, Akeredolu said the Ekiti State Governor was with them at the Southwest Governors’ Forum meeting held earlier at Lagos House, Marina, but had to leave to catch a late flight to Port Harcourt where he was a guest speaker at the Nigerian Bar Association, NBA, Annual General Conference dinner.

A statement signed by the Chief Press Secretary to Governor Akeredolu, Richard Olatunde, noted that Akeredolu’s clarification on Fayemi’s absence during the visit became necessary due to various insinuations and reactions in the media.

“Governor Fayemi was with us at the Southwest Governors’ Forum meeting held earlier at the Lagos House in Marina. He had to leave to catch a late flight to Portharcourt where he was billed to attend the NBA Conference dinner.

“He sent his apology to Asiwaju as well as his good wishes. The rest of us who visited Asiwaju’s residence tendered same and extended Fayemi’s good wishes,” he said.

Akeredolu said the visit was to show their love for the former Lagos State Governor and wish him well after his return to the country.