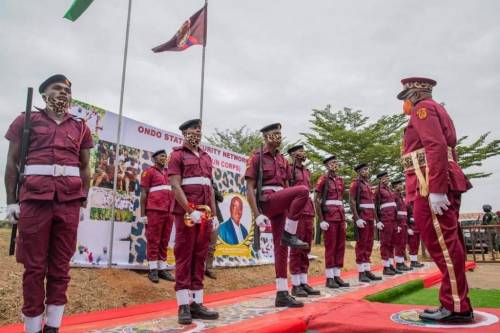 Some operatives of Oyo State Security Network Agency, also known as Amotekun, have allegedly killed a 21-year-old man in Ibadan, the state capital.

It was gathered on Thursday that operatives of the new security outfit set up by Governors in the South West Nigeria shot one Tosin Thomas at Makola area of Ibadan on Wednesday.

It was learnt that Thomas died as a result of the gunshot he sustained.

It was gathered that Mr Thomas was pronounced dead at the University College Hospital, Ibadan.

No fewer than 5 (five) people have been killed as a result of clashes between Amotekun operatives and hoodlums in the state.

Fadeyi in a statement made available on Thursday added that the deceased was pronounced dead at UCH.

He said, “A report was received from one Alamu Timothy at Makola Police station today 14/01/202 and alleged that one Tosin Thomas ‘M’ 21 YRS of Ode Olo area Ibadan while going home at Total Filing station Makola Ibadan on 13/01/2021 at about 1130 HRS, was hit by bullets from a gun fired by Amotekun operatives.

“He was rushed to University College Hospital (UCH) for immediate medical attention and thereafter was confirmed dead by medical personnel.

“Investigation has commenced into the matter and further development shall be unfolded please.”