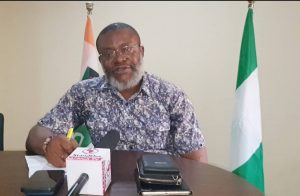 Dr Harris Chuma-Odili, the Director-General and Chief Strategist of Chief Akachukwu Nwankpo Campaign Organisation has resigned from his position for personal reasons.

Nwankpo, a former Presidential Aide to Goodluck Jonathan is the candidate of African Democratic Congress (ADC) to the Nov. 6 governorship election in Anambra.

This is contained in a letter by Chuma-Odili to his former principal and national leadership of the ADC.

A copy of the letter which was made available to newsmen in Awka on Thursday, said he was taking up new challenges outside politics.

”This is to inform you of my intention to resign from active and partisan politics with effect from   Sept. 22.

“My decision in this regard is entirely personal to me,  having served in various capacities, including as Media Director, and Director-General Nwankpo Governorship Campaign Organisation.

“I have resolved to immerse myself in some other vocations and take on some new challenges.

“I will miss the company of my friends and associates and all those relationships I built in the course of promoting your gubernatorial ambition all over the state,” he said.

Chuma-Odili is an indigene of Ogbunike, Oyi Local Government Area, a filmmaker and presently the National President of Association of Digital Media Core Advocates.

Meanwhile, Nwankpo has accepted the resignation and described Chuma-Odili as a strong ally who had helped immensely in shaping his campaign.

The candidate described the 2021 Anambra governorship election as a unique contest noting that the erstwhile director-general’s resignation was a reality but would not affect his chances negatively as they were in constant touch.

“Harris is a man that has many crowns dangling over his head, so his resignation is normal, I thank him for helping me shape my campaign, we remain good friends.

“There is no tension anywhere, the campaign is focused because this election is unique,” he said.