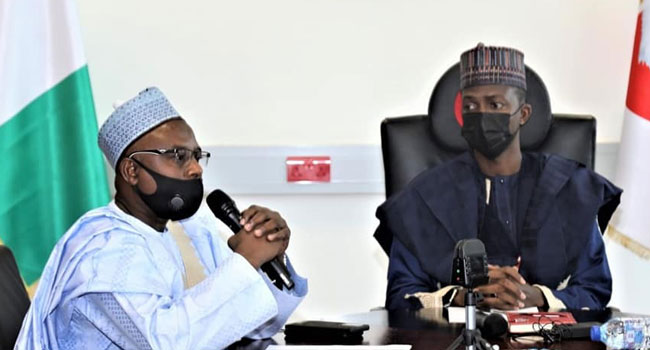 The Economic and Financial Crimes Commission, EFCC and the Code of Conduct Bureau, CCB are to strengthen their collaboration in the fight against corruption in Nigeria.

Speaking on Friday, June 18, 2021, while receiving a delegation from the CCB led by its chairman, Professor Isah Mohammed in his office, the Executive Chairman of the EFCC, Abdulrasheed Bawa, promised to assist the CCB in training staff of the Bureau in the areas of administration, assets tracing and recovery as well as forensic investigation.

He also offered CCB access to the Commission’s Forensic Laboratory for analysis pending when it is able to establish her own laboratory. “We have a full-fledged Forensic Laboratory that can assist you rather than venture into something that will further burden the budget,” he said.

The offer was in response to the request by the CCB chairman, who specifically called for EFCC’s assistance to the Bureau in the areas of assets tracing and recovery, forensic investigation, and collaborative investigation.

The EFCC boss said officials from the Commission’s Academy will visit the CCB to carry out a training needs assessment which will assist them in designing programmes that will suit the needs of the CCB.

Bawa commended the CCB for her response to requests for assets declaration forms of politically exposed persons by the Commission. He however appealed that the process be further expedited. “We have this problem of delay in response. We understand that some of these forms are being declared at state level but we still believe that it takes too long a time for us to receive these responses”, he said.

The EFCC chairman further advised the CCB to explore the possibility of revising the assets declaration form to eliminate gaps that are currently exploited by public officers to withhold information on their assets.

To enhance the seamless partnership between the agencies, Bawa requested that the CCB designate an officer who will handle requests from the EFCC.

In his remarks, Prof. Mohammed commended Bawa “for the brilliant way he approaches matters”, adding that they were at the EFCC “to collaborate and make sure that the fight against corruption succeeds.”

Reflecting on the history of his agency as the pioneer anti-graft agency in Nigeria, the CCB chair lamented that despite its age, CCB was the most challenged among the anti-corruption agencies in terms of funding.

He however dispelled the notion that the Bureau was secretive in its handling of assets declaration forms of public officers, adding that it had always responded to requests from relevant agencies. “We have nothing to hide, and we are working with all the anti-corruption agencies with transparency. Whatever information that is requested is given to public institutions,” he said.

Nigeria Will Continue To Collaborate With China For Critical Infrastructure – Presidency