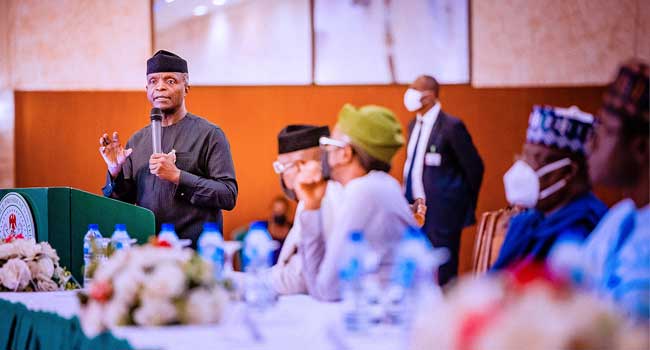 An enlarged Tripartite Committee set up by President Muhammadu Buhari to resolve differences within the All Progressives Congress (APC) has disagreed on the use of direct primaries by parties to select their candidates.

At the end of an enlarged meeting on Tuesday which held in the State House and chaired by the Vice President, Professor Yemi Osinbajo, the committee which consists of the Executive, Legislature and the APC, clearly failed to convince members of the National Assembly on the need to provide an alternative for the direct primary option.

This meeting comes hours after the passage of the electoral bill by the National Assembly which has approved direct primaries as sole mode of primaries upon which political parties will pick candidates for general elections.

Speaking to State House correspondents after the meeting, Kogi State Governor, Yahaya Bello said that the governors do not have a problem with the provision but argued that it leaves the party with no alternative.

Conversely, members of the National Assembly at the meeting insist that direct primary remains the way to go because it has been working for the electorate.

Governor Bello who does not rule out the option of returning the bill, asserted that the final decision on the matter rests with President who is expected to give assent to the electoral bill.