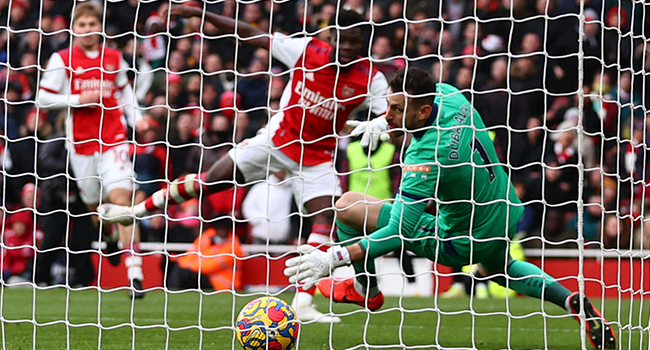 Arsenal got back on track with a 2-0 win over Newcastle on Saturday as Eddie Howe suffered his first defeat as manager of the Premier League strugglers.

Mikel Arteta’s side saw their 10-match unbeaten run in all competitions come to a painful end in last weekend’s 4-0 thrashing at Liverpool.

But second half goals from Bukayo Saka and Gabriel Martinelli at the Emirates Stadium made it four wins from their last five league games.

Written off after their poor start to the season, Arsenal are fifth, level on points with fourth placed West Ham, as they chase a berth in next season’s Champions League.

Rejoining the race for European places represents significant progress for Arteta, but few opponents will be quite as obliging as woeful Newcastle.

“I’m happy with the points after losing to Liverpool. You have to win straightaway,” Arteta said.

“The word was we had to be patient. We had to play with urgency and rhythm. We found spaces and that’s how we scored the goals.”

Howe was in charge in person for the first time after missing last weekend’s 3-3 draw against Brentford due to a positive coronavirus test.

Hired by Newcastle’s new owners to replace the much-maligned Steve Bruce, Howe will have been left under no illusions about the size of the task facing him on Tyneside.

It was bleak viewing for Newcastle co-owner Amanda Staveley, who sat huddled beneath a blanket in the directors box on a bitterly cold afternoon in north London.

While the Saudi-led consortium that bought Newcastle have spoken about emulating the success of Manchester City and Paris Saint German under Middle Eastern ownership, Howe’s only focus is saving the Magpies from relegation.

Former Bournemouth boss Howe will need to drag much-improved performances from his winless team if they are to avoid a catastrophic slide into the Championship.

“The game was decided in the incident with Callum Wilson and the penalty – a tough call against us – then they scored in the aftermath,” Howe said.

“Momentum in football is so important. We need to get that win as quickly as we can.

“It is great to be back. You don’t enjoy losing though.”

Martin Odegaard’s free-kick forced a fine save from Martin Dubravka as Arsenal pressed hard for the opener.

Newcastle finally broke out to launch their first incisive raid, a move that ended with Jonjo Shelvey’s 20-yard curler being tipped onto the bar by Aaron Ramsdale.

But the Gabon forward somehow side-footed against the post from two yards in a candidate for miss of the season.

Newcastle had failed to keep a single clean-sheet in the Premier League this season and Saka ensured that grim run extended to a 13th game in the 56th minute.

Running onto Nuno Tavares’s deft pass, Saka timed his surge from the left wing perfectly as he smashed a low finish past Dubravka into the far corner from 10 yards.

That was Saka’s last contribution as the England international limped off injured soon after.

Saka’s replacement was Martinelli and the Brazilian made an immediate impact as he doubled Arsenal’s lead in the 66th minute.

Newcastle had appealed in vain for a penalty when Callum Wilson went to ground under Gabriel’s challenge.

Moments later, Takehiro Tomiyasu’s pass looped over the Newcastle defence and Martinelli produced an audacious chipped finish for his first goal since May.

THE SIGNATURE SHOW: STATE OF THE NATION - Nigeria Under Buhari is Better and Stronger