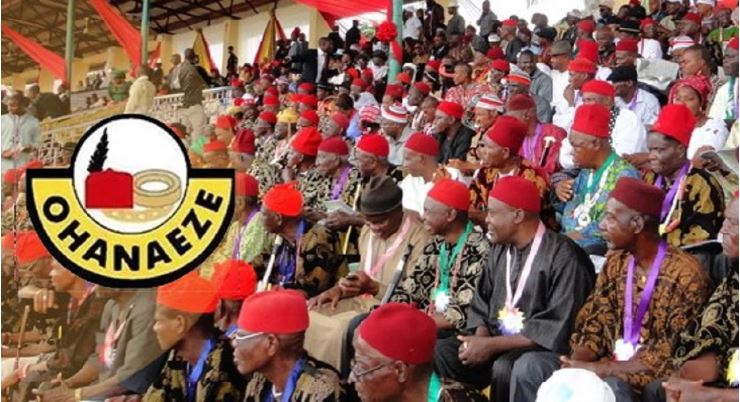 Apex Igbo socio-cultural organization, Ohanaeze Ndigbo has faulted the Indigenous People of Biafra, IPOB, over the ban it placed on Nigeria National Anthem across the zone.

It had been reported that in its New Year message, the IPOB banned the Nigeria National Anthem, as well the consumption of non-native cows.

However, in a statement on Wednesday by the Ohanaeze Secretary-General, Mazi Okechukwu Isiguzoro he cautioned that such an order would spell doom for the people of the region.

The Ohanaeze scribe noted that the order “will affect the ongoing diplomatic efforts to free Nnamdi Kanu. Instead, the FG might unleash bitterness on the South-East.

“This order is also nonetheless destructive to the campaign for the Igbo presidency in 2023 and will give birth to avoidable military raids on all public schools in Southeastern Nigeria, with the ongoing ‘Operation Golden Dawn’.”

He declared that in order not to endanger the lives of Igbos “reciting of the Biafra anthem in public schools remains prohibited, forbidden and proscribed, as the South-East is still an integral part of Nigeria.

“We cannot afford to mislead and misinform our pupils into trending into paths that will attract grave consequences for Ndigbo.

“Ndigbo should flout such despicable orders of absurdity, as it will be the rationale for future deployment of military Tucson fighter jets to South-eastern Nigeria.”

Isiguzoro further stated that rather than the enforcement of Biafra anthems in public schools, “IPOB should join Ohanaeze in the promotion of Igbo language, cultural heritage, and values in all South-East public schools. This is the best way to get our youngsters to remain committed and imbibe the cultural values and heritage of Ndigbo.”

He, however, expressed support for the ban on the consumption of Fulani cows and the use of it in Igboland for ceremonies or during festival seasons.

“The recent security challenges in South-eastern Nigeria are created by killer herdsmen masquerading as cattlemen to perpetrate heinous onslaught against our local communities.

“The enforcement of the ban on consumption of Fulani cattle should be a protest against unhealthy and disease-infested cows being sold to Ndigbo,” he noted.

Imo: Okorocha is my younger brother, I have nothing against him – Uzodinma