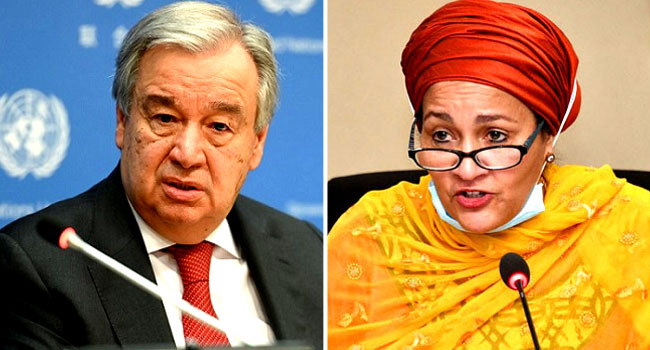 President Muhammadu Buhari has congratulated the Secretary-General of the United Nations, Antonio Guterres, on his re-appointment for a second term in office.

He also commended the extension of the tenure of the UN Deputy Secretary-General, Amina Mohammed, for another five years.

The President celebrated with the UN chiefs in a statement on Saturday by his Senior Special Assistant on Media and Publicity, Garba Shehu.

He congratulated the Secretary-General and Deputy Secretary-General, who was a former Minister of Environment in Nigeria, for the global recognition and opportunity to serve humanity with their experience.

He believes Mohammed’s extension of tenure in office will further encourage more women and the girl-child, particularly in Africa and Nigeria, to aspire to new heights of leadership, dream beyond the borders of their country, and learn from her dedication to seeing lives transformed for the better.

The President extolled the former minister for her contributions to development, at home and abroad, and prayed that God would grant her good health, strength, and more wisdom for the journey ahead.

The 193-member UN General Assembly had approved a resolution extending Guterres’ five-year term, leading to his inauguration on Friday.

Thereafter, he reappointed Mohammed to serve as the Deputy Secretary-General for a second term.

The second term of Guterres, who succeeded Ban Ki-moon as the ninth UN Secretary-General in January 2017, will commence on January 1, 2022, and run until 2027.

Mohammed, on the other hand, is a diplomat, politician, and the fifth Deputy Secretary-General of the United Nations.

She had served as a special adviser to Ban Ki-moon, as well as the Minister of Environment from 2015 to 2016.