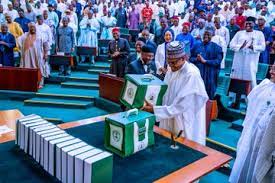 President Muhammadu Buhari on Thursday presented  the 2022 Appropriation Bill comprising of N16.39 trillion expenditure for presentation to the joint sitting of the National Assembly.

President Muhammadu Buhari while presenting the 2022 Appropriation Bill  said Federal Executive Council considered the changes in the 2022-2024 fiscal projections based on implementation of the Petroleum Industry Act 2021 and other necessary expenditures that should be accommodated in the 2022 budget.

He said that the  key assumptions and targets underlying the budget provisions included oil price of  $57 per barrel; oil production of 1.88 mbpd; exchange rate of N410.15 to a USD; oil revenue of N3.15 trillion and non-oil revenue of N2.13 trillion.

“The resultant deficit of N6.258 trillion which will be financed by new borrowings of N5.012 trillion (of which domestic – N2.506 trillion and foreign – N2.506 trillion); drawdowns on Project-tied Multilateral/Bilateral loans – N1.156 trillion; and Privatization Proceeds of N90.73 billion,” he said.

On the approved 2022 Appropriation Bill for an aggregate expenditure of N16.39 trillion for 2022, the minister gave the components as the adjustments to the Medium-Term Fiscal Framework 2022-2024 including statutory transfers of N768.28 billion, debt service of N3.61 trillion and Sinking Fund for Maturing Debts of N292.71 billion.

On special allocations for the completion of legacy projects of the present administration, the minister said: “The Federal Ministry of Works and Housing has a provision of N388 billion; the Power sector has about N377 billion; the Ministry of Agriculture has N98 billion; the Transportation Ministry has N189 billion.

“All the major projects are being provided for. The target is to make sure that we have some of these key projects completed and commissioned during Mr. President’s tenure.

“Currently, agriculture sector contributes 23% of the GDP. We have record of expanding the agricultural value chain; we’ve had very little or no processing in agriculture until this administration.” he stated.

Anambra: Buhari not in support of emergency rule – Obiano