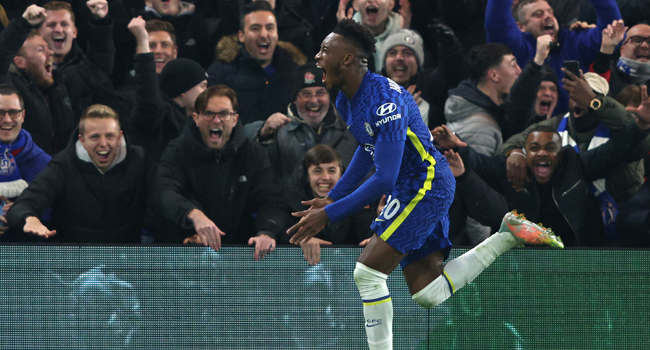 Chelsea booked their place in the Champions League last 16 as Trevoh Chalobah’s controversial goal put the holders on course for an imperious 4-0 rout of Juventus on Tuesday.

Thomas Tuchel’s side took the lead when Antonio Rudiger’s handball went unpunished in the build-up to Chalobah’s first half opener at Stamford Bridge.

Juventus never recovered from that blow as Reece James, Callum Hudson-Odoi and Timo Werner struck after half-time to send Chelsea to the top of Group H.

Chelsea are above Juventus on goal difference and will guarantee a first place finish if they win at Zenit Saint Petersburg in their last group fixture on December 8.

It was another commanding display from Chelsea, who are unbeaten in 10 games in all competitions since losing 1-0 at Juventus in September.

James, one of three scorers on the night to graduate from Chelsea’s youth academy, was especially dynamic at right wing-back as the 21-year-old matures into a world-class talent.

Tuchel’s evening wasn’t completely problem free as both N’Golo Kante and Ben Chilwell were forced off, with the latter’s knee injury looking especially concerning for the Premier League leaders ahead of Manchester United’s visit on Sunday.

Lacklustre Juventus had already qualified for the last 16, but the defeat puts their hopes of finishing top of the group in severe jeopardy.

Chelsea’s star striker Romelu Lukaku was back on the bench after his lengthy absence with an ankle injury.

Juventus striker Alvaro Morata was on familiar ground against his old club, but the Spaniard didn’t receive a warm welcome.

He was repeatedly booed and subjected to chants of “Chelsea reject” after a disappointing spell with the Blues that ended in 2020.

That hostility wasn’t reserved to the stands as Chelsea pressed Juventus relentlessly, dominating possession in a match played almost exclusively in the Italians’ half.

James nearly broke the deadlock when his inswinging free-kick forced an alert save from Wojciech Szczesny at his near post.

Hakim Ziyech’s corner reached Rudiger and he bundled it towards Chalobah, who fired into the roof of the net from close-range for his third goal this season.

Juventus appealed furiously for handball against Rudiger and although it did strike the defender’s arm, the goal was allowed to stand as he did not make a deliberate movement towards the ball.

It was Chalobah’s first Champions League goal in his maiden start in the tournament, extending a breakthrough season for the 22-year-old.

Chelsea’s lead was preserved by a brilliant goal-line clearance from Thiago Silva moments later as the Brazilian raced back to hook the ball to safety after Morata lobbed Blues keeper Edouard Mendy.

After Kante was taken off, his replacement Ruben Loftus-Cheek twice lost possession in dangerous areas, with Rodrigo Bentancur curling over from the second his mistakes.

That was a rare malfunction in the Chelsea machine and normal service was resumed in the 56th minute.

Chilwell’s cross was glanced into James’ path at the far post and he smashed a ferocious shot into the far corner from an acute angle.

Chelsea were rampant and Hudson-Odoi put the result beyond doubt two minutes later.

Gliding through the ramshackle Juventus defence after a blur of quick passes, Loftus-Cheek deftly found Hudson-Odoi and his clinical finish sent Tuchel dancing onto the pitch in a fist-pumping jig of delight.

The sight of Chilwell being helped off the pitch after a challenge from Adrien Rabiot took some of the shine off Chelsea’s impressive performance.

But there was still time for Werner to tap-in with virtually the last kick after James’ sublime pass picked out Ziyech for the cross.