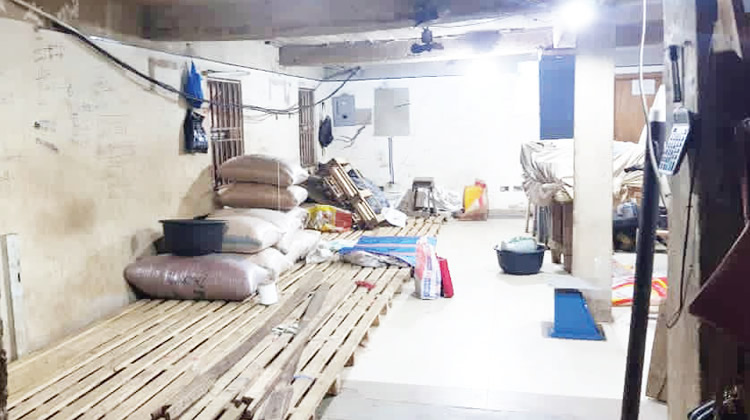 Controversy has trailed the invasion of the Better Life section of the Ikotun Market in Lagos State by men of the Nigeria Customs Service.

While some of the traders claimed that the law enforcement officers carted away local rice, including the money they kept in their shops, the agency said only foreign rice smuggled into the state were taken away.

The incident was said to have happened around 1am on Wednesday, March 24, 2021.

Some of the traders, who spoke to one of our correspondents, claimed that the officials took no fewer than 592 bags of rice and N5m cash.

They alleged that the men were accompanied by armed soldiers, adding that they broke the locks of their shops.

A trader, Wasiu Ayinde, said he hurried to the scene after getting information on the invasion, adding that he was shot at when he queried the officials.

He said, “I only sell local rice. I have a machine that I use for the production of local rice in Minna, Niger State. Since the Federal Government said we should not sell foreign rice again, I stopped selling and focused on local rice.

“I was called around 1am that customs officials were in the market and that they were burgling shops, but I didn’t pay attention since I was not selling contraband. Another call came in around 2am that all my goods had been taken away. I got up immediately, mounted my motorcycle and went to the market.

“On getting to the market, I saw that they had packed all the 341 bags of rice in my shop, so I started screaming at the officials that I was a local rice dealer. They started shooting and did not mind if I was hit. My wife and I had to run for our lives; we got injured in the process.

“By the time they left and we came to the shop, I discovered that the N600,000 in the shop was also gone. I have been at home since that day because there is nothing else for me to do.”

Another trader, Ogbonanya Ngene, said apart from the 246 bags of rice taken from his shop, the sum of N1,236,000 he wanted to deposit in a bank the following day was missing.

A rice dealer, Dickson Ogbonna, queried why the customs men would break into the shops in the wee hours of the night without notice or any search warrant.

He said, “Around 1am, my brother called me that customs officials came with soldiers to the market to pack our goods. I tried to rush down, but my family held me down till around past 2am. When I got there, I found out that everything in my shop was gone. They packed 78 bags of rice, which cost about N24,000 each and took away N278,000.”

The traders’ lawyer, Saidi Sanni, in a letter dated March 29, 2021, and addressed to the Comptroller-General of the NCS, demanded the return of the traders’ goods.

The letter read in part, “Our clients have been rendered financially hopeless without means of livelihood by men of the Nigeria Customs Service led by one Charles. It is very unfortunate that customs men allowed themselves to be used as willing tools of illegality and oppression under the ignoble guise of searching for foreign rice.”

Duniya said, “I want you to let members of the public know that our laws enable officers to carry out operations upon reasonable suspicion. The law empowers customs to move into any structure or warehouse without a search warrant. If the shop owners have genuine allegations as to the loss of money and the seizure of local rice, they can come forward to make a complaint and it will be looked into.”

In a related development, aggrieved traders at the popular Bodija Market in Ibadan, Oyo State, on Thursday, protested against the reported overnight raid of their stores at the Arisekola Shopping Complex, Bodija, by men of the Nigeria Customs Service.

It was gathered that a patrol team of the NCS besieged the rice section of the market on Wednesday, carting away stocks like bags of rice, vegetable oil and soya beans.

The protesting traders, who took to the streets on Thursday, described the action as robbery, considering the time and manner of the operation.

They were said to have stormed the Customs House, Oyo/Osun Command, in the Ikolaba area of the city.

One of the traders, who identified himself as Alhaji A.A. Waris, said, “This is becoming unbearable for us. It is disheartening that what we are experiencing here is not happening in the north. Why will customs break into our stores in our absence and take away our goods?

“Where were the customs officers when we bought the rice? Most of the stocks are local, but we re-bagged them to look like imported rice because people prefer foreign rice. We implore President Muhammadu Buhari to caution the officials before they turn Bodija market to a battlefield.”

The aggrieved traders were said to have taken their protest to the Governor’s Office at the Oyo State Secretariat, Agodi, Ibadan, for government intervention.

The Babaloja of Bodija Market, Mr Ismaila Jimoh, said the customs officers stormed the market after the traders left their shops.

He stated, “When they came, they broke into the shops and carted away bags of rice, vegetable oil and soya beans. Some traders said the money they kept inside some bags of rice was taken by the men. When our people went to their office to protest, they said it was from their headquarters. They even fired gunshots.”

The Public Relations Officer, NSC, Oyo/Osun Command, Mr Olukayode Wet, said the raid was not carried out by men of the command, saying, “it must have come from the headquarters.”

“They protested to our office, but everything has been settled,” he added.