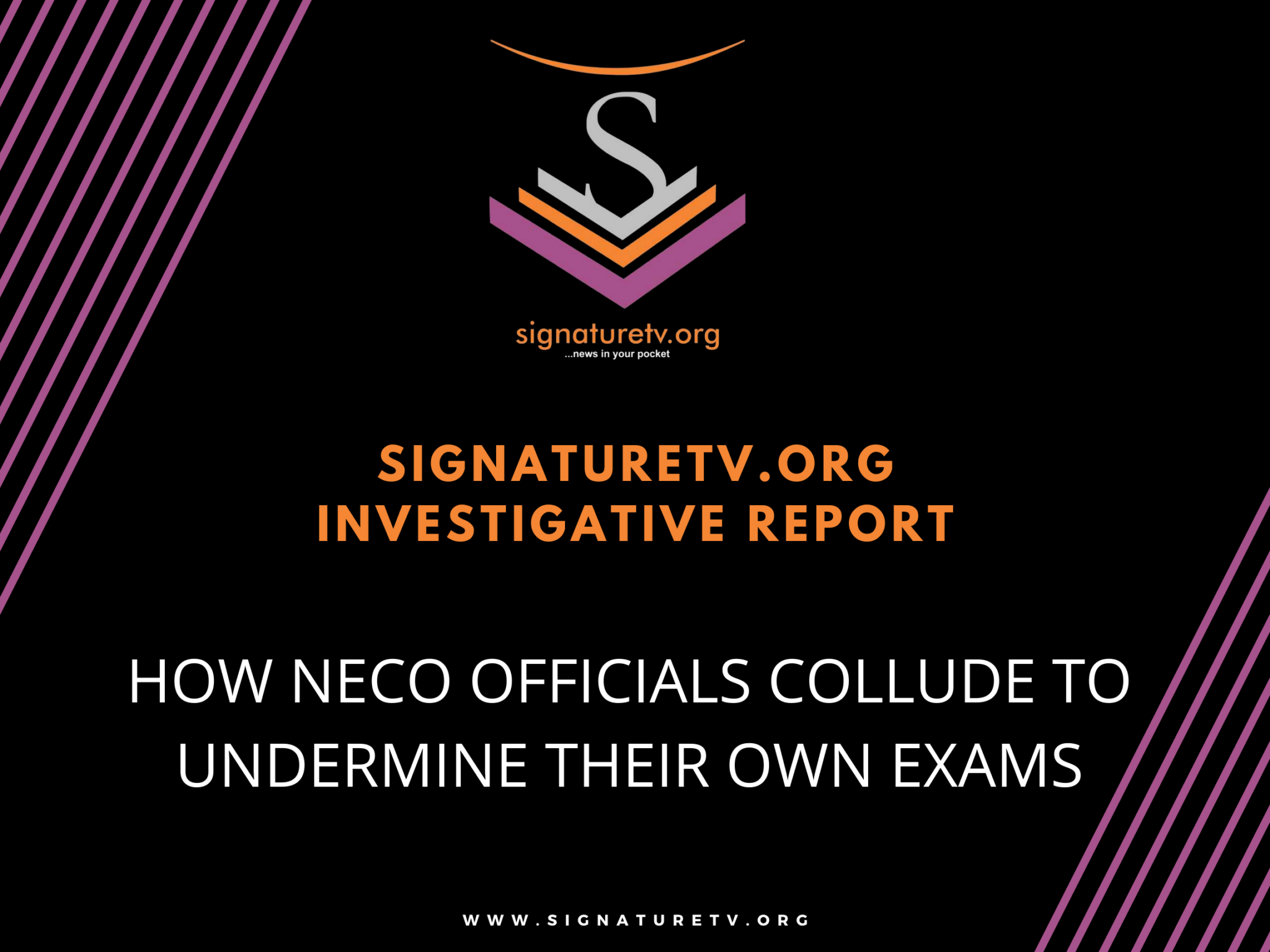 We serve you this undiluted investigative report in this special edition of Corruption Tori. It is the third in our special investigative series Signature TV Investigates. It is hot!!! SUPPORTED BY THE MACARTHUR FOUNDATION

On Monday February 17, Signature TV approached an ordinary level coaching center in Abuja with a request to be registered for the June/July NECO Examination. Having attempted ordinary levels before, Signature TV did not want to receive any coaching from the centre. The centre owner offered more than registeration NECO Exams.

He offered to make it possible for our undercover reporter not to even sit the examination. He offered to provide us a non-appearance service in a special Centre at a fee.

The coaching centre owner was the first leg in the web of examination fraud known to Nigerian Education Ministry Officials even at the highest level of the Federal Ministry of Education.

He linked us to one Mrs Munsurat, who would not disclose her other details, except that she is a proprietress of a private school which cannot pass for a community pig’s pen but goes by the exalted name Phebian Kings and Queens College, located in Alagbado area of Kabala West in Kaduna State.

The contact opened the second stage of the fees for results negotiation. SignatureTV had insisted on taking both the English and Mathematics papers and could allow nonappearance for the other subjects.

But first, what is nonappearance? You pay and the Exam ring provides a hired writer who would sit for the paper in your name. The fee has to be negotiated.

After Twenty Eight Thousand was agreed the woman gave our undercover reporter a GTB account number 0132019267, which we discovered belonged to one Bashirat Nike Oluwale.
On November 11, the date for mathematics subject, SignatureTv was given a school uniform and with our undercover camera, the entire fraud ring began to unfold

That will be in the second part….

Before the next part, we have reached out to Ibrahim Nabanyi of the Nigerian Parents Teachers’ Association  and the NECO authorities. Interestingly they are cooperating with signature TV to burst this ring of results for sale and bring them to justice.

We have also written the Minister of Education Mal. Adamu Adamu, requesting for interrogation of the dangers inherent in making results of examination body like NECO available for sale. Unfortunately the Minister and the Ministry have been stalling and dribbling us.

Next Sunday, paying for NECO supervisor, external examiners and Ministry of Education officials to get questions, ready made answers for students who do not even know what the questions are.

It is a Signature TV Investigates Exclusive – Join us on AIT and signaturetv.org

Buhari is aware of hardship in Nigeria – Aregbesola