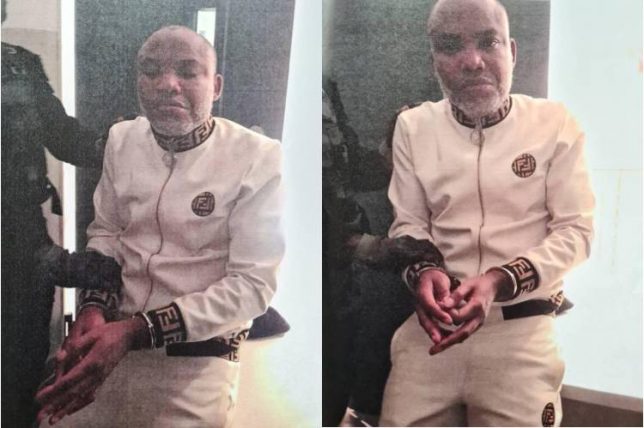 An Abia High Court sitting in Umuahia and presided by Justice K.C.J. Okereke, yesterday, granted the leader of the Indigenous People of Biafra (IPOB), Nnamdi Kanu, leave to serve in a court process to the Respondents in a suit he instituted for the enforcement of his fundamental human rights.

The respondents, in the suit filed by Nnamdi Kanu’s counsel, Aloy Ejimakor, include the Federal Republic of Nigeria, Attorney General of the Federal, Chief of Army Staff and Brigade Commander, 14 Brigade of the Nigeria Army, Ohafia, Abia State.

The order was sequel to a motion ex parte brought by counsel to the IPOB leader, in pursuant to orders 3, 4 and 5, Rules of the Fundamental Rights (Enforcement Procedure) Rules, 2009.

After going through the affidavit in support of the motion paper as well as written address of counsel, and after hearing Aloy Ejimakor, counsel to the applicant, the judge granted leave to the applicant to serve all the court process in the suit through substituted means upon the respondents.

The judge also ordered that the applicant put all the respondents on notice of the application and fixed September 21 for the return date for the motion on notice.

In a release after the court sitting, Kanu’s counsel, Ejimakor, said the material issue in the suit was the unbroken chain of infringements which he stated began with the 2017 extrajudicial attempt on Kanu’s life in Abia State; his involuntary flight to safety/exile; his abduction in Kenya and his extraordinary rendition to Nigeria.

“We believe that these supervening issues have complicated Kanu’s prosecution and, thus, must be judicially dispensed with before any further prosecutorial action can proceed.”

In light of the above, therefore, Ejimakor said he has placed before the court, the following reliefs:

“A declaration that the military invasion of the applicant’s building and premises at Isiama, Afaraukwu Ibeku, Abia State, on September 10, 2017, by the respondents or their agents is illegal, unlawful, unconstitutional and amounts to infringement of the applicant’s fundamental right to life, dignity of his person, his personal liberty and fair hearing as guaranteed under the pertinent provisions of Chapter IV of the Constitution of Federal Republic of Nigeria, 1999 (hereafter, CFRN) and the African Charter on Human and People’s Rights (Ratification and Enforcement) Act (hereafter, the Charter).

“A declaration that the expulsion of the applicant from Kenya to Nigeria by the respondents or their agents and their consequent detention and planned prosecution of the applicant in charge No: FHC/ABJ/CR/383/2015 (Federal Republic of Nigeria v. Nnamdi Kanu) is illegal, unlawful, unconstitutional and amounts to infringement of the applicant’s fundamental right against unlawful expulsion and detention, and to fair hearing, as enshrined and guaranteed under the pertinent provisions of CFRN and the Charter).

“An order of injunction restraining the respondents or their agents from taking any further step in the prosecution of the applicant in charge No: FHC/ABJ/CR/383/2015 (Federal Republic of Nigeria v. Nnamdi Kanu) pursuant to said unlawful expulsion of the applicant from Kenya to Nigeria.

“A order mandating and compelling the respondents or their agents to, forthwith, release the applicant from detention and restitute or otherwise restore applicant to his liberty, same being his state of being as of 19th June, 2021; and to thereupon repatriate the applicant to his country of domicile (to wit: Britain) to await the outcome of any formal request the respondents may file before the competent authorities in Britain for the lawful extradition of the applicant to Nigeria to continue his prosecution in charge No: FHC/ABJ/CR/383/2015 (Federal Republic of Nigeria v. Nnamdi Kanu).

“An order mandating and compelling the respondents to issue an official letter of apology to the applicant for the infringement of his fundamental rights; and publication of said letter of apology in three national dailies.