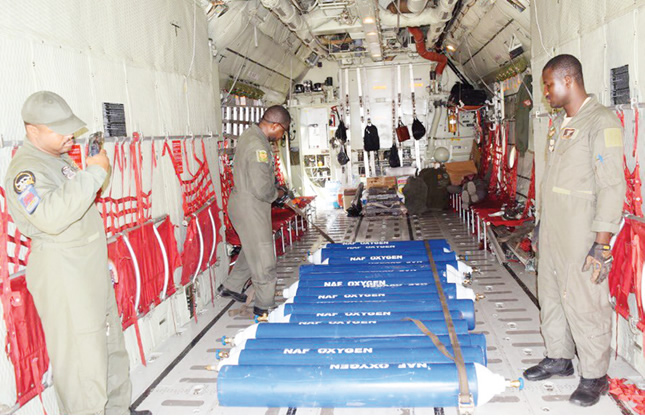 The Lagos State Government will inaugurate 10 oxygen and sampling centers to improve the management of severe-to-critical COVID-19 cases.

The Lagos State Commissioner for Health, Prof. Akin Abayomi, disclosed this during a media briefing on the update of the second wave of COVID-19 in Lagos on Monday.

He noted that medical oxygen is the primary treatment for the majority of patients who were suffering from severe COVID-19 symptoms.

”Many of these patients present late to the isolation centers, thus leading to fatalities.

“This life-saving gas helps patients breathe when they cannot do so on their own, and timely access to oxygen is critical to ensure the patient’s survival.

“If anyone is breathless, go to any of these centres, and the doctors and nurses there will assist to stabilize you with oxygen before moving you with the ambulance to the isolation centre,” he said.

The commissioner stressed that the state was committed to ensuring an improved healthcare system toward enhancing quality healthcare and saving the lives of its citizens.
He, however, warned that the rate of COVID-19 infection positivity was increasing in the state due to the festivities and disregard for safety measures.

”On December 26, the state confirmed 253 new COVID-19 infections, increasing the total confirmed cases of infections in the state to 28,774,” Abayomi said.

He added that 75 confirmed cases were currently being managed at the isolation centres while 3,716 active cases under home-based care were under the state’s EKO TELEMED.

Abayomi said that one fatality was recorded on the reported day.

He said that as the COVID-19 pandemic continued, residents would need to make lifestyle adjustments to live with the pandemic.

“If you feel unwell, get tested; if positive, self-isolate or present to any isolation centre or follow up clinics,” the commissioner said.

He also said that the state would deploy effective messaging and education through its various platforms while enforcing all guidelines through the respective state agencies.

Abayomi noted that the state was discovering more positive cases among international travelers into the state.

“Positivity for inbound travelers is on the rise, eight percent this week, four percent cumulative as Nigerians in the Diaspora return to spend Christmas in Lagos

“It has come to our attention that a number of the people are patronizing individuals that sell fake COVID-19 results.

“We are currently putting in processes to identify both buyers and sellers and we will not hesitate to prosecute either to the full extent of the law,” he said.

Abayomi said that the state’s goal from inception was to flatten the curve, and would intensify its strategies of identifying, testing, isolating and management of cases to reduce the rate of transmission.