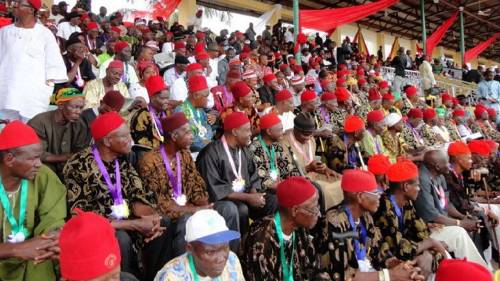 Imo State Chapter of Ohaneze Ndigbo as members have impeached the president, Dr. Ezechi Chukwu over his alleged gross misconduct and abuse of office.

The members, who accused the embattled president of allegedly co-opting people who are not registered members of Ohanaeze Ndigbo in the state solely for pecuniary interest and willfully sidelined members from the activities of the Imo Ohanaeze.

They equally alleged that Chukwu had concluded plans to use the unregistered people as delegate members to represent Imo Ohanaeze during the upcoming Ohanaeze general elections.

The impeachment notice, which was signed by Nze Emeka Bishop Njoku, Deputy President, Imo Ohanaeze, Shedrack Nwaokoro (Okigwe LGA Chairman), Chief J.K.C Onuoha (Owerri zonal chairman), Ambassador Akpelu Azunna E (former President), Imo Ohanaeze, among other signatories, read in part: “Your Excellency, Sir, the Imo Ohanaeze members are by this letter asking that you use your exhalted office to communicate to Dr Ezechi Chukwu to cease from parading himself as the president of Ohanaeze, Imo State Chapter as we do not see him as such again.

Continuing,  the aggrieved petitioners said: “For his pecuniary interest, Dr Ezechi Chukwu went about co-opting unknown people, who are not registered members of Ohanaeze Ndigbo in Imo while sidelining completely known and respected members of Imo Ohanaeze.

“Presently, there exists near irreconcilable factions in both important wings of Igbo socio-cultural organization in Imo State. The warring groups were orchestrated by Dr Ezechi Chukwu to pave way for him to make fraudulent income using Ohanaeze without challenges from any angle.”

The aggrieved members, therefore, urged the President General of Ohanaeze Ndigbo, to ask the Imo Ohanaeze Ndigbo president to immediately step aside or risk crisis as they would not back down on their resolve to impeach him.

However, efforts made to reach Dr Ezechi Chukwu, to react to the issues raised by the petitioners were unsuccessful. Calls made to his GSM number, 0813****496 could not connect as the servicer provider kept sending an audio response that the phone was switched off. The first call was made on Friday at 2:33 pm. His number was also called three times yesterday (Saturday) at 5.44 pm, 5.46 pm and 5:47pm.