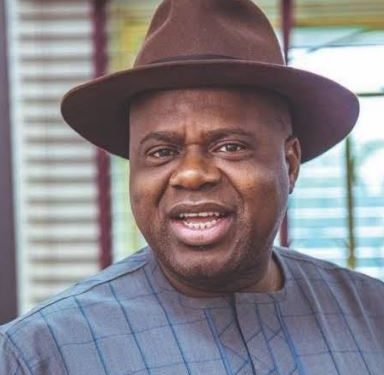 Bayelsa State Governor Douye Diri has directed the Ministry of Works and Infrastructure to repair the collapsed portion of the bridge on the Edepie-Otuasega-Imiringi road in Ogbia Local Government.

The governor, who gave the directive at the weekend during an inspection of the failed portion, said he asked the ministry to carry out remedial work on the federal road project, as its users were Bayelsans who suffered the effect of the damage.

The road, which links three local governments, was cut off by erosion last Wednesday, leaving commuters stranded on both sides.

The governor’s spokesman, Mr. Daniel Alabrah, quoted him in a statement as saying that his administration would not fold its arms and watch Bayelsans suffer as a result of the collapsed bridge.

He said the level of damage indicated that thorough work was not done by the contractor and the engineers that supervised the construction.

“Recently, the Federal Government told states not to repair their roads. But this road links three local governments and the primary users are Bayelsans. So, while we know it is a federal road, we had to take immediate action.

“To ameliorate the suffering of our people, the Ministry of Works and Infrastructure mobilized down here to ensure that remedial work is done to allow our people move.

“It is, however, unfortunate that the job that was done appears not to be a very concrete one. I’m sure if the engineers come here, they will know where the problem lies,” the governor said.

Responding to questions from reporters, Senator Diri said with the pace of work, the failed portion would be fixed in about one week.

He was accompanied by Speaker of the House of Assembly Abraham Ingobere, another legislator, Tonye Isenah, the Chief of Staff, Government House,  Chief Benson Agadaga as well as the Commissioner for Special Duties (Bayelsa East), Preye Broderick and her Communication, Science and Technology counterpart, Dr. Promise Ekio, alongside other top government functionaries.