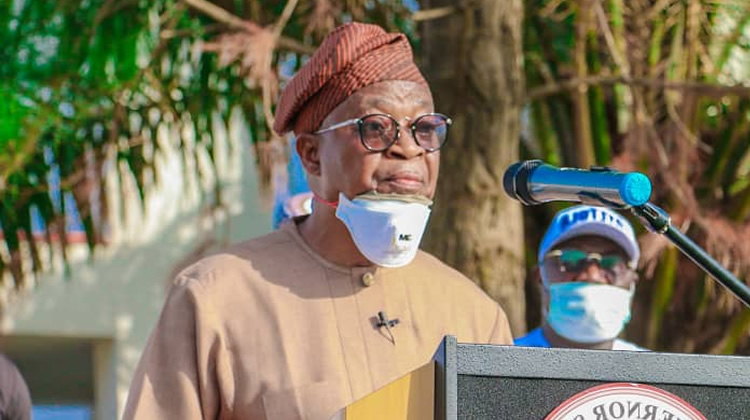 Governor Gboyega Oyetola of Osun State has urged Nigerians not to mourn the death of the Chief of Army Staff (COAS), Lt. Gen. Ibrahim Attahiru, like unbelievers.

Oyetola, who had taken to his Twitter handle and Facebook page on Friday night, also commiserated with President Muhammadu Buhari and the families of the deceased, describing Attahiru’s death as shocking.

In a statement by his Chief Press Secretary, Ismail Omipidan, on Saturday morning, the Osun Governor said the late COAS was a brave, assertive and distinguished army General who gave his best to his country by leading the war against insurgency in the North East and banditry in other parts of the country from the front.

“For me, the death of the COAS was shocking and devastating. On behalf of the Government and the good people of Osun, I commiserate with President Muhammadu Buhari, Chief of Defence Staff, Major General Lucky E.O Irabor and the entire country on the unfortunate death of the Chief of Army Staff, Lt. Gen. Ibrahim Attahiru and other persons on board the ill-fated aircraft. My thoughts and prayers are with families of the deceased. May God grant their souls eternal rest,” the Governor said.

Oyetola further said: “But as we mourn, I urge us all not to mourn like unbelievers who don’t believe in the existence of God and life after death. Both Islam and Christianity preach that no leaf can fall from the tree without the knowledge of the Almighty, the creator of heaven and earth, the knower and seer of all things, long before they were planned and before they happened.

“Let’s mourn like Muslims and Christians who know God and pray for the repose of the souls of the deceased, while praying to God to grant the families they left behind and us all the courage and fortitude to bear the irreplaceable loss.

“The COAS was a gallant officer, an administrator par excellence and an uncommon patriot who gave his best to the fatherland. May Allah grant him Aljanat Firdaus.”