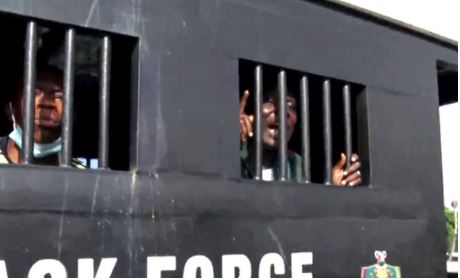 Two persons have been arrested during a car procession ongoing at the Lekki tollgate in Lagos State.

The police arrested the two men on Wednesday morning amid the parade organised to mark the one-year anniversary of the #EndSARS protests.

“I did not do anything,” said one of the young men before his arrest. “They beat me, they collected my phone, they took my money; the police have not learnt their lessons.”

Shortly after they were arrested, both men were taken into a waiting truck of the Lagos State Task Force, after which the vehicle zoomed off.

While the police are stationed at the tollgate for security purposes, officials of the Lagos Neighbourhood Safety Corps (LNSC) are maintaining a free flow of traffic.

One of the protesters was arrested while talking to reporters who were at the tollgate to cover the procession. Before this, there was an altercation between some members of the press and the security officials.

On Tuesday, rapper Falz and comedian Mr Macaroni shared an e-flier to announce a car procession to mark one year anniversary of the protests that led to the disbandment of the Special Anti-robbery Squad (SARS) of the Nigeria Police.

In the flier posted on their verified Instagram handles, they said the car procession would be held in honour of the victims of police brutality in Lagos and other parts of the country.

“In memory of those who died that day and those we have lost to police brutality, we will: drive through the toll gate from 8-10 am; blast our horns in unison as we drive through and wave our flags,” the leaflet read. “Innocent Nigerian citizens waved flags and sang till they were shot at, injured and killed. We must never forget.”

Both celebrities had, however, appealed to persons interested in the procession to stay guided and stay in their vehicles throughout the parade, as well as in groups for safety reasons.

“We’re rolling up in cars tomorrow (Wednesday) to drive through the tollgate. We know their way, so a procession of cars is the safest option to minimize police harassment. We will stay in our vehicles throughout.”