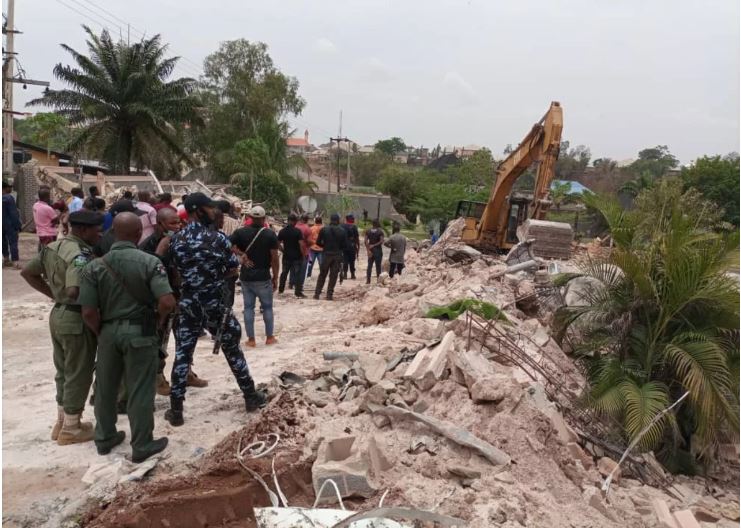 The Enugu Capital Territory Development Authority, ECTDA, has withdrawn the building approval it issued in 2016 to the Chancellor of Coal City University, Mr. Chinedu Ani for erection of his residence located in Plot 5 Onoh Crescent, GRA, Enugu.

Part of the palatial residence was demolished last week by ECTDA for illegal construction on the Ekulu waterway and blocking of a connecting road between GRA and Enugu-Onitsha expressway.

Ani, however, alleged that the demolition of his residence was a result of personal disagreement between him and the Chairman of ECTDA, Dr Josef Onoh, whom he accused of being part of the people that sold the road and waterway to him in 2015.

Ani in an interview during the demolition exercise accepted that there was a road that transverse through the area before he built on the land, but that the original owners of the estate, Rockonoh Property Company limited gave him a go ahead to close the road.

“The Onohs sold the land to me and they told me that the road was created by their father when RCC came to construct the estate and that their father dismantled the bridge before they sold to one Walter Aneke who sold to me; and before I bought the land I went to them and asked them if I should acquire this place because I remember that while I was a child there used to be a road there. The only problem is that they wanted money from me,” Ani alleged.

Investigation, however, revealed that the ECTDA on March 22 2021 withdrew the building approval based on sundry allegations against Ani, including material discrepancies in the actual size of his plot, pending litigation on alleged default on payment for the plot and lack of evidence to support Ani’s valid title for possession of the disputed plot.

ECTDA Head of Physical Planning and Development Control, Chinedu Ozochioke in the withdrawal notice accused Ani of multiple failures to submit his title documents that would have helped the agency resolve discrepancies and petitions against his ownership of the plot.

Among documents obtained is a petition to the Enugu state Governor, Ifeanyi Ugwuanyi, by one Chief Aloysius Maduka who alleged that Ani was illegally occupying his plot without full payment of N40 million that was agreed as fee for purchase of the land and which is still a subject of litigation in an Enugu state high court.

Maduka further alleged that the size of the land he sold to Ani which he (Maduka) is still owed N12 million outstanding balance was 4,081.72 square meters of land as against about one hectare of land that Ani occupied before the demolition.

“Our client’s effort to get the balance of the sum of Twelve million (N12, 000, 000) naira only, when he came down from Lagos did not yield any fruit. Our client is presently counterclaiming the above sum in suit No E/21/14 between Rockonoh Property Company limited and 17 others and our client has filed a motion to join Chinedu Ani and ATCOIE limited in the said suit,” Maduka’s counsel petitioned to Governor Ugwuanyi.

In January 2021, Maduka made due his petition through a prayer to the Enugu State High Court, asking for an order to join Chinedu Ani and ATCOIE Nigeria limited as defendants because of their acquired interest and as necessary parties for the purposes of determining issues in the controversy of the disputed property.

Maduka supported his petition with an original survey plan measuring 3,052.557 square meters and a memorandum of understanding between him and Karastan Company limited that sold the land to him wherein an additional 1,029.163 square meters was also purchased from the company to form Plot 5 Onoh crescent and which brought the size of the land to 4,081.72 square meters. He also presented bank transaction details that indicated that Ani only paid him N28 million instead of the agreed N40 million land deal.

In another revelation, the Chairman/ Managing Director of Rockonoh Property Company limited, Mr. GB Onoh, had in 2014 approached the court of the then Chief Justice of the state, Innocent Umezulike, who granted his appeal and issued an order barring any new development on the Onoh crescent other than the building approval granted to Chief C.C Onoh in 1976 as registered in No.90 vol.854 at page 90 in volume 854 of the land registry office at Enugu.

In September 2020, GB Onoh further petitioned the ECTDA alleging that Ani unilaterally blocked a street called Onoh crescent that led to a bridge, equally called Onoh Bridge, over Ekulu River that was a link between GRA and Enugu-Onitsha Expressway.

“Chinedu Ani’s actions, who was not even born when the bridge was constructed, should in no way be condoned and should face the same fate as others like him who arrogate their individual interests over that of the masses. His illegal blockade should be brought down and the Bailey bridge restored,” GB Onoh requested.

In 2015, Rockonoh Property Company through its counsel, Chudi Nwankwo Ozokolo and Associates, wrote to Ani, asking him to remove the “nuisance and obstruction” erected on the bridge and road at Onoh quarters.

Subsequently, in 2020, the Karastan Company limited in response to inquiry from ECTDA wrote to the agency authenticating its sale of land to Aloysius Maduka and others, noting that it never directly sold any plot of land to Mr. Chinedu Ani.

“The said Mr. Chinedu Ani in total disregard to law and order engaged on a willful distortion of the private estate layout by unilateral encroachment on our company’s plot 6 measuring 1,430.762 square meters, conversion of Ekulu River natural water way into his property, converting same to a water fountain in his private residence, causing undue hardship to all residents in the estate whom use same as a source of laundry, water and related essential services for over 45 years,” Karastan company petitioned.

Overwhelmed by the litany of petitions against Ani, added to his alleged non-cooperating attitude to the ECTDA, the state government agency after demolition of the obstructing property, said it was further moved to withdraw the Building No: ECTDA/BP/119/2015 approved on 24/02/2016 for Ani.

The ECTDA wrote to Ani and said that “Based on the submissions by your predecessors in the title, Messers Rockonoh Property Company limited, Karastan Company Limited, Chief Aloysius Maduka and Victor Amushi, the size of your plot is 5081.720 square meters, as shown in plan No. DA/EN231/2015 prepared by Surveyor P.A. Okoli, of 05/08/2015. However, the size of your plot in the building plan submitted to the Authority is 5858.013 square meters. You have been repeatedly requested to submit your title documents to the Authority to assist us in reconciling this discrepancy but you have failed, refuted or neglected to do so.

“The Authority was petitioned by your predecessor in the title, Chief Aloysius Maduka vide a letter dated 18/03/21 and he claims that he has not transferred title to you because you are yet to complete payment for the said property. The Authority has also been made aware of the pendency of suit No: E/21/14 between Rockonoh Property Company limited vs. Aloysius Maduka, Walter Aneke and 13 others and a pending motion to join you in the suit which has to do with title to the said land. As it is, the Authority cannot find any evidence that you possess a valid title to the land in question, hence this decision.”

When contacted, Ani failed to react to the revocation of his building approval, but had accused the Chairman of ECTDA, Josef Onoh, of engaging in a vendetta over his refusal to invite him (Onoh) to his birthday party.

Ani had also alleged that Onoh demanded money from him over the land transaction which he said he refused, claiming also to have bought the land in dispute directly from the Onohs’ but which the available documents could not authenticate.