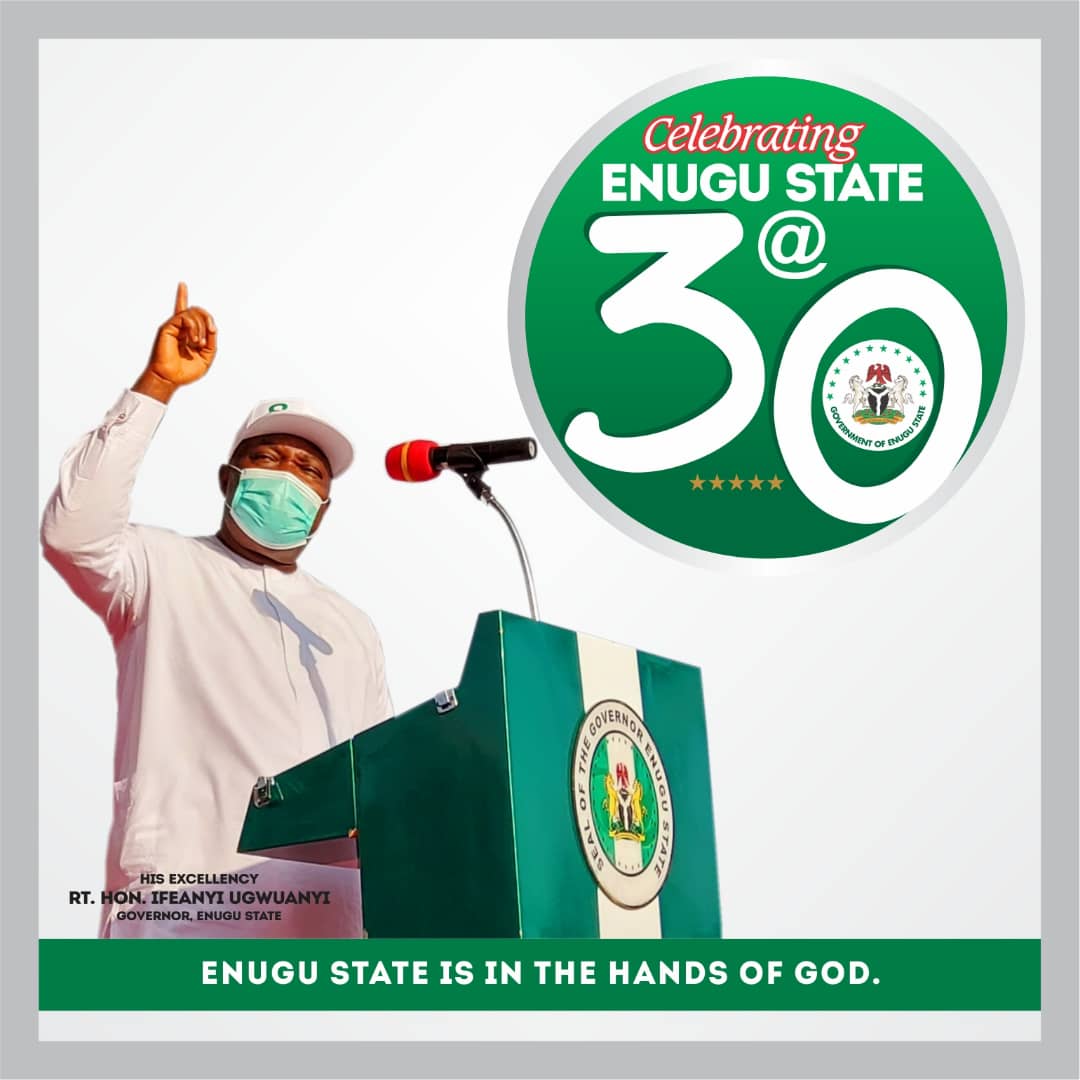 Historically, the creation of Enugu State 30 years ago by General Ibrahim Babangida’s regime significantly transcended providence. It was largely the outcome of a tenacious struggle for the emancipation of the people of Wawa-speaking area (Enugu and Abakaliki) of Igboland, by the founding fathers of the state.

Both perceptually and in reality, it was a sustained agitation against injustice meted to a people (Wawa) who were honest, patient, intelligent and hardworking.

The spirit of the dogged struggle was to birth and bequeath to its people and future generations a state anchored on peace, development, unity, equity and justice.

Enugu as the capital city of Nigeria’s Eastern Region; East Central State; old Anambra State; old Enugu State, when Abakaliki (now part of Ebonyi State) was part of it and the present Enugu State, has come a long way on the side of history. It is home for all Igbo, politically, socio-culturally and economically.

The creation of Enugu State on August 27, 1991, brought unbridled excitement and a sense of accomplishment to the founding fathers. It consummated the liberation of the Wawa people to live freely in a society founded on the pillars of peace, equity and justice.

No wonder, Governor Ifeanyi Ugwuanyi of Enugu State, in his 2015 inaugural address, recommitted himself to the dreams and aspirations of the founding fathers of the state to “take up the gauntlet of the struggle for the emancipation of the Wawa man from where our heroes past stopped”.

Gov. Ugwuanyi also vowed, in accordance with the ideals and aspirations of the founding fathers of Enugu State, to “deploy government services to create fair and equal opportunity for every willing citizen to make a living, educate our children, and enjoy life in a peaceful and secure environment”, while pursuing vigorously, employment generation, enhanced social services and good governance, rural development, security and justice.

This sound vision, the governor has dexterously accomplished in spite of avalanche of challenges confronting the nation’s economy, security and public health, among others.

In a recent forum, Gov. Ugwuanyi reiterated his commitment to the sustenance of these noble, lofty ideals and the principles of equity and justice in running the affairs of the state, reassuring that his administration will, at its end, “bequeath to all, a just, equitable, peaceful, united and prosperous Enugu State that has ascended more rungs on the development ladder”.

*Quest for equity and justice ahead 2023*

This pronouncement was in response to the recent demand by the people of Enugu East Senatorial District, at a well-attended mega rally, in Enugu, that it is their turn to produce the next Governor of Enugu State in 2023, in the spirit of equity and justice, and based on the long established rotational template in the state.

Speaking at the rally, themed: “Oganiru Enugu East Senatorial District”, the Convener and Speaker of the Enugu State House of Assembly, Rt. Hon. Edward Ubosi, stated that it was the unanimous stance of the people of Enugu East Senatorial District that Gov. Ugwuanyi has a major role to play in the choice of his successor since his predecessors enjoyed such privilege during their tenures as governors of the state.

Aligning with the Speaker’s position at the rally, the Chairman of the All Progressives Congress (APC) in Enugu State, Dr. Ben Nwoye announced that the party has zoned its governorship position in 2023 to Enugu East Senatorial District.

The APC chairman eulogized Gov. Ugwuanyi for his uncommon leadership qualities as a peaceful, humble and development-oriented governor.

On his part, former President of the Senate, Senator Ken Nnamani, endorsed the stance of the people of Enugu East Senatorial District at the rally and commended the organizers of the event for galvanizing the people of the zone to come and appraise the existing rotational principle of zoning in Enugu State.

Senator Nnamani lauded Gov. Ugwuanyi for the peace being enjoyed in Enugu State, expressing confidence that the governor’s disposition to peace and good governance will guarantee a peaceful transition in 2023, where a candidate from Enugu East Senatorial District will be elected governor of the state.

Lending their support, a few months after, the people of Enugu West Senatorial District converged on Awgu Local Government Secretariat and declared that it is the turn of Enugu East Senatorial District to produce the next governor of Enugu State in 2023, based on the principles of equity and justice as well as the existing rotational arrangement, which was reaffirmed by the leaders of the Peoples Democratic Party (PDP), during the State Caucus meeting of the Party in 2013.

Speaking at the massive rally tagged: “Ife-Emelumma Enugu West Unity Rally for Gburugburu”, which was graced by Gov. Ugwuanyi (on invitation), his deputy, Hon. Mrs. Cecilia Ezeilo, Speaker of the House, Rt. Hon. Ubosi, State Chairman of the Peoples Democratic Party (PDP), Hon. Augustine Nnamani, present and former members of the National and State Assemblies, Chairmen of Aninri, Awgu, Ezeagu, Oji-River and Udi LGAs, Traditional Rulers, the Clergymen, youth and women groups, among others, the Convener and Chairman of the Central Organising Committee of the rally, Senator Ben Collins Ndu, told Gov. Ugwuanyi that the people of Enugu West Senatorial District have assembled to speak with one voice that the zoning of the governorship seat of the state favours Enugu East Senatorial District.

Senator Ndu pointed out that the PDP meeting of 2013 was attended by the party leaders such as the then State Chairman of the PDP, Chief Engr. Vita Abba, then Governor of Enugu State, Sullivan Chime (from Enugu West Senatorial District), then Deputy President of the Senate and the current Senator representing Enugu West Senatorial District, Senator Ike Ekweremadu, then Speaker of the State House of Assembly, Rt. Hon. Eugene Odo, other members of the National and State Assemblies who were members of the Caucus and members of the Party’s Board of Trustees from the state, among others.

He added that it was based on the PDP decision on zoning of the governorship position that Rt. Hon. Ugwuanyi from Enugu North Senatorial District emerged the governorship candidate of the party and thereafter the Governor of Enugu State in 2015.

In their goodwill messages, other speakers at the unity rally, such as all the members of the State House of Assembly in Enugu West Senatorial District, Chairmen of the five LGAs in the zone, members of the State Executive Council (EXCO), the PDP LG Chairmen, the Traditional Rulers, the youth and women, former House of Representatives member, Rt. Hon. Ogbuefi Ozomgbachi, former Minister of Power, Prof. Chinedu Nebo, former Minister of Aviation, Amb. Mrs. Fidelia Njeze, Chief Anayo Onwuegbu, among others, endorsed the pronouncement made by the Convener, reiterating that it is the turn of Enugu East Senatorial District to produce Gov. Ugwuanyi’s successor in 2023.

Addressing the mammoth crowd at the rally, Gov. Ugwuanyi did not mince words in rekindling his unwavering commitment to the sustenance of a peaceful, united and prosperous Enugu State, saying: “In doing so, we shall be consultative, just and equitable”.

His words: “Having listened to all the speeches, I now understand that ‘Ife Emelu Mma’ mantra, is both a statement of fact and a philosophy; a philosophy that situates and inspires a just and equitable dispensation of political leadership in our polity.

“In its literal sense, it is ‘ofo’; an invocation of the divine spirit to bear witness to our acts of justice and equity.

“Your message is therefore clear. It is understood in all ramifications. May God grant your prayers and heart’s desire”.

In 1999, Senator Dr. Chimaroke Nnamani from Nkanu West LGA in Enugu East Senatorial District occupied the exalted seat at the Lion Building as the Governor of Enugu State for two consecutive tenures of eight years, on the platform of the Peoples Democratic Party (PDP), which ended on May 29, 2007.

Senator Nnamani who could have ordinarily advanced a cause for his successor to emerge from his senatorial district (Enugu East), championed and spearheaded a rotational zoning process among the three Senatorial Districts of Enugu State, which led to the emergence of a candidate of the PDP from Enugu West Senatorial District, in the person Barr. Sullivan Chime, as his successor in 2007.

It was based on this rotational arrangement that the offices of the Deputy Governor and Speaker of the State House of Assembly were zoned to the other two senatorial districts, Enugu East and Enugu North, respectively.

Shortly after the successful reelection of Chime in 2011 as Enugu State Governor, the debate on the sustainability of the zoning arrangement as played out in the two consecutive transitions in 2007 and 2011, occupied the major part of the PDP-led government of the former governor.

The agitation that it was the turn of Enugu North Senatorial District to produce Chime’s successor, as the last senatorial district to benefit from the triangular rotational arrangement, in the spirit of equity and justice, was spontaneous and justifiable.

It was a trajectory that was unanimous and endearing to the dreams and aspirations of the founding fathers of Enugu State, who painstakingly struggled for the emancipation of the Wawa people of Igboland, for them to enjoy peace, freedom, love, unity, development and political stability, laced with justice and equity.

The recent revelation at the Enugu West Ife-Emelumma rally that the PDP reaffirmed a rotational zoning formula in 2013 which favoured Enugu North Senatorial Zone to produce Chime’s successor in 2015, with a caveat that, after eight years, it will move to Enugu East Senatorial Zone, and thereafter Enugu West, connotes peace, equity and justice.

As we celebrate Enugu State at 30; as Gov. Ugwuanyi continues to dedicate his time and energy to the sustenance of peace and entrenchment of good governance in spite of the nation’s economic, security and public health challenges; as the debate on 2023 keeps occupying the minds of discerning members of the public, one important message by the governor remains that “in the fullness of time, dialogue, justice and equity shall take pre-eminence”.

The governor is grateful that “beyond our election, God has been with us all the way. His blessings have afforded us peace and unity. His speed has taken us through far-reaching developmental milestones. His love has sheltered us from the menace of COVID-19 pandemic and associated economic challenges. His mercy has navigated us through the #EndSARS protests and recent spikes of insecurity”, adding that “in every adversity, He (God) has made us stronger, more peaceful, more united and more determined to succeed as a people”. Enugu State is truly in the hands of God.

We Will Not Hesitate To Make An Example Of You, Permanent Secretary Tells State House Anti Corruption Unit Members

Insecurity: We Are Worried, Things Are Not Getting Better – Sultan Of Sokoto