HomeSportsEuro 2020: Ronaldo has quality to break my record, says Daei 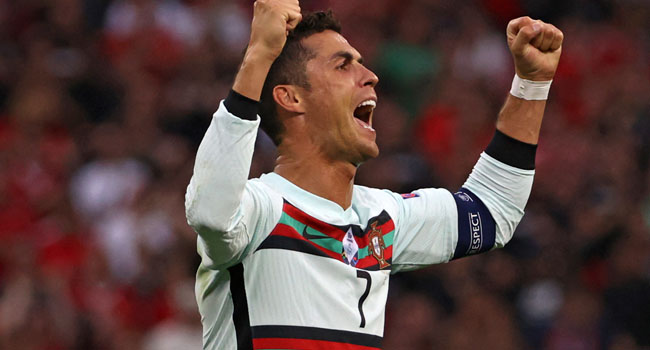 The ‘Shariar’ (King in Persian) scored a remarkable 109 goals in 149 appearances for Iran between 1993 and 2006, an achievement many thought would never be matched.

But Ronaldo is fast closing in, moving to 106 international goals from 176 games with his double in Portugal’s 3-0 win over Hungary in Budapest on Tuesday.

Daei has said on several occasions that he would be “delighted” if Ronaldo broke his record, as he believes the Juventus striker ranks among the best three players in history, alongside Lionel Messi and Diego Maradona.

“Records are made to be broken,” Daei told Khabar Online news agency in 2018.

“Ronaldo really has the qualities to do it. I have a lot of respect for him. He is such a great player that it isn’t even necessary to sing his praises.”

Ronaldo’s record chase fascinates the Iranian press, with articles about him published every time the 36-year-old edges closer to Daei’s tally.

Daei was prolific against other Asian sides, netting five times in a 7-0 win over Sri Lanka in 1996 and scoring four goals in a game on four other occasions, including in a historic 17-0 World Cup qualifying victory over Guam.

He was not just a flat-track bully, though, setting up the winning goal, scored by Mehdi Mahdavikia, in Iran’s famous 2-1 victory over the United States at the 1998 World Cup.

Daei also captained his side at the 2006 World Cup before retiring from international football aged 37.

He was the first Iranian to play in one of Europe’s big leagues, in Germany, first with Arminia Bielefeld and then at Bayern Munich and Hertha Berlin.

Having later turned to coaching, he became known for his outspokenness and spats with referees, opposing managers and club presidents.

But the 52-year-old Daei remains a living legend in his home country, even boasting 6.7 million followers on Instagram.

He has branched out into different fields, including business, and also has an engineering degree from the prestigious Sharif University in Tehran.

Politically, he sometimes disagrees with the ruling government, in power since the Islamic revolution in 1979.

A rare figure acting in civil society in Iran, he regularly takes a stand on major social and humanitarian issues.

In 2017, when aid from the authorities was slow to be provided, he launched a campaign to support the people in the western province of Kermanshah after an earthquake which killed more than 600 people.

But Daei has always said he would not enter politics.

“My late father told me not to think about politics and never get involved personally,” he told the Varzesh sports website last month.

“I have never supported or will support any candidate in the Iranian presidential election.”

Daei is now a successful businessman — he owns a sportswear company and is also the head of construction projects in northern Tehran.

Maybe that is a field where he can still compete with Ronaldo, who promotes a hotel chain in his name, if the Portuguese takes his on-pitch record.