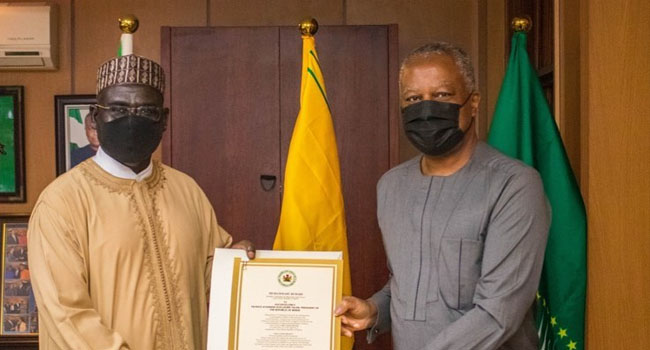 The federal government has presented a letter of credence to a former Chief of Army Staff (COAS) Lt. Gen Tukur Buratai (rtd) as Nigeria’s ambassador-designate to the Benin Republic.

Minister of Foreign Affairs Geoffrey Onyeama handed over the letter to the former army chief in Abuja on Tuesday.

A former Chief of Defence Staff General Abayomi Gabriel Olonisakin (rtd) was also appointed as ambassador-designate of Nigeria to Cameroon.

Their most recent appointment had equally triggered outcry with critics calling on the Senate to reject their nominations.

But on February 23, 2021, the lawmakers confirmed their nominations. Senate President Ahmed Lawan during the confirmation said the former service chiefs served the country to the best of their abilities.

Senator Lawan urged the executive to utilise their experiences as much as possible and they should be posted to countries where they will be useful.

On February 18, the former service chiefs were screened by the Senate Committee on Foreign Affairs.

The committee which was led by Senator Mohammed Bulkachuwa held a closed session before the service chiefs were ushered into the room for the commencement of the screening.

Buhari appointed the ex-service chiefs in 2015. Before they “voluntarily resigned” earlier in the year, they came under pressure to relinquish their positions due to the escalating levels of violence in the country.