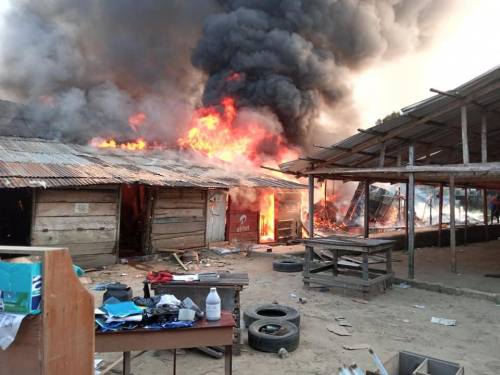 No fewer than seven upholstery shops have been destroyed in Bayelsa State following a fire incident which razed the huge wooden structures.

It was gathered that the incident occurred on Saturday around the Biogbolo-Epie area of the dual-carriage Mbiama-Yenagoa Road in the state capital city, Yenagoa.

The inferno was said to have burnt several industrial, screwing and sewing machines, wardrobes, beds, tables, settees and chairs, generators and working tools in the affected shops.

The incident caused gridlock as only one of the lanes of the road was available for use by motorists and residents.

The cause of the fire, which also burnt down the high tension cables on electric poles in the area, could not be immediately ascertained.

One of the upholstery makers, Ikechukwu Onyenaobi, said no life was lost in the incident.

He said before the arrival of firefighters, shop owners and sympathisers made frantic efforts using a mixture of water and detergent to quench the fire to no avail.

Onyenaobi said the razed shops had been packed full with finished products for Christmas sale before the incident happened.

He said, “We don’t know what caused the fire. Seven shops were burnt. We tried to save some chairs and to see that the fire did not escalate, but it did not work.

“The major thing we do here is the upholstery. We only attach furniture work to it; that’s why some of us have spraying and screwing machines. All our major equipment, especially industrial machines and generators, were burnt, even our tools.”

Onyenaobi appealed to the state government and the lawmaker representing the area at the state House of Assembly to come to their aid, as the loss was too big for those affected to bear.    ,,