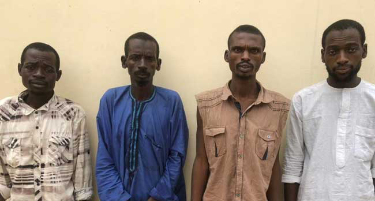 Four suspects have been arrested over the murder of a Bauchi State lawmaker, Musa Mante and a retired Divisional Police Officer.

The suspects were nabbed by operatives of the Intelligence Response Team of the Inspector General of Police.

In a statement, the IRT said the kidnappers confessed to have killed the retired police DPO, identified as a Chief Superintendent of Police Garkuwa for making life tough and miserable for them by always searching for them while he was in acting service.

Also confessing, the suspects said they murdered a serving lawmaker, of the Bauchi State House of Assembly and kidnapped his wives and children for failing to assist them with money after seeking his assistance several times.

IRT Commander Tunji Disu spearheaded the coordinated operation that led to the arrest of the suspects following complaints by indigenes of Dass Local Government Area of Bauchi State on their activities and intelligence reports gathered.

They were said to have been involved in several other crimes including armed robbery operations and kidnappings in Plateau, Bauchi and Kaduna villages and market roads.

“We entered the house of the honourable member House of Assembly Hon. Musa Mante and killed him inside his room and took physical cash of two million naira (N2,000000),” the leader of the gang, Galadima, said.

“And we kidnapped his two wives and took them to Dutsin Miagoshi Igala and the victims spent almost four days in captivity and we demanded a ransom of N35 million.”

On how they killed the lawmaker, he said that he was the one guarding the deceased man’s gate while other gang members entered through the roof of the house and took away his money before killing him.

Reacting to the arrest, Force Public Relations Officer, Muyiwa Adejobi, assured that all the suspects are going to be prosecuted in accordance with the provisions of the laws of the nation.