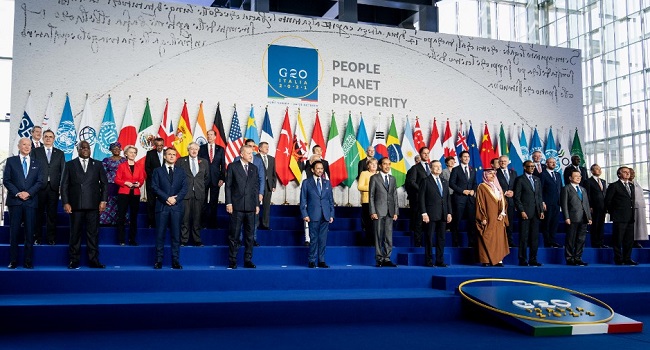 G20 leaders meeting in Rome on Sunday committed to the key goal of limiting global warming to 1.5 degrees Celsius and pledged action on the use of coal, but fell short on a target of zero emissions, according to a final draft communique.

The pledges by the Group of 20 major economies, who emit nearly 80 percent of carbon emissions, are viewed as crucial to the success of make-or-break UN climate talks taking place in Glasgow over the next fortnight.

According to a draft communique, which several sources said was the final version due to be published later Sunday, the leaders agreed to keep in play key commitments agreed at the landmark 2015 Paris accords.

“Keeping 1.5 degrees within reach will require meaningful and effective actions and commitment by all countries, taking into account different approaches,” it says

Diplomats said the language used was tougher than in the Paris deal, but activist groups slammed the final statement as “weak” and half-hearted.

According to the statement, leaders of countries including the US, China, India, Russia, plus the EU, call for clear national plans that “align long-term ambition with short- and medium-term goals, and with international cooperation and support”.

But experts say meeting the 1.5 degree target means slashing global emissions nearly in half by 2030 and to “net-zero” by 2050 — and there is no firm date in the G20 communique, which speaks only of reaching the goal of net zero “by or around mid century”.

The leaders did agree to end funding for new unabated coal plants abroad — those whose emissions have not gone through any filtering process — by the end of 2021.

“If the G20 was a dress rehearsal for COP26, then world leaders fluffed their lines,” said Executive Director Jennifer Morgan.

However, French President Emmanuel Macron had earlier said it was too early to write off the success of the Glasgow talks.

Nearly 200 nations are gathering in the Scottish city, with many of the leaders in Rome — including US President Joe Biden — heading straight there.

The Rome summit had to “do its utmost” to ensure the success of Glasgow, but “nothing is ever written before a COP”, Macron told the weekly Journal du Dimanche.

China — by far the world’s biggest carbon polluter — plans to make its economy carbon neutral before 2060, but has resisted pressure to offer nearer-term goals.

India, meanwhile, argues that if net-zero by 2050 is the global goal, then rich countries should be carbon neutral ten years earlier to allow poorer, emerging nations a larger carbon allowance and more time to develop.

Earlier Sunday, summit host Mario Draghi, the Italian prime minister, Prince Charles and Pope Francis had all called on G20 leaders — and by extension, the wider group of world leaders meeting in Glasgow — to think big.

Draghi called climate change “the defining challenge of our times”, saying: “Either we act now… or we delay acting, pay a much higher price later, and risk failing.”

Prince Charles, a committed environmentalist and summit guest, had also reminded leaders of their “overwhelming responsibility” to keep climate change in check.

“It is impossible not to hear the despairing voices of young people who see you, ladies and gentlemen, as the stewards of the planet, holding the viability of their future in your hands,” the heir to the British throne told the G20.

Pope Francis later tweeted: “This is a moment to dream big, to rethink our priorities… The time to act, and to act together, is now!”

President Xi Jinping of China was absent from the meeting, as was Russia’s Vladimir Putin, although they were participating via videolink.

UN Warns Libya Must Not Split Presidential And Parliamentary Polls