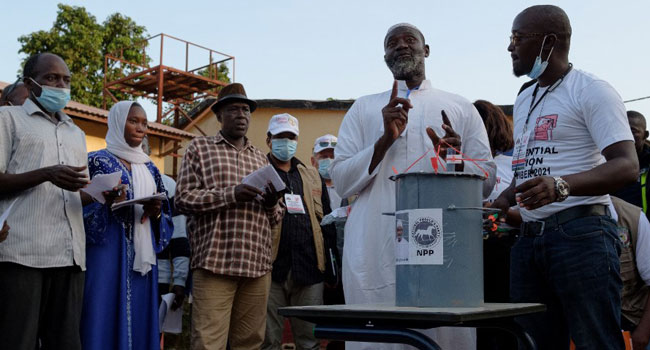 Gambians were waiting Sunday to find out the winner of the first presidential election in the West African nation since former dictator Yahya Jammeh fled into exile.

Results from only around 15 of the country’s 53 electoral districts have so far been published online by the state broadcaster since polls closed at 1700 GMT Saturday.

Speaking on condition of anonymity, an electoral commission official said that results would be published district-by-district, with the commission announcing the winner at the end.

He expected that the count would be finished on Sunday and the result announced by the commission’s president.

The election is being closely watched as a test of the democratic transition in The Gambia, where Jammeh ruled for 22 years after seizing power in a bloodless coup in 1994.

The ex-autocrat was forced into exile in Equatorial Guinea in January 2017 after Adama Barrow, then a relative unknown defeated him at the ballot box.

Several factors have slowed the tally, including The Gambia’s scarce financial resources, high turnout, and the country’s unusual voting system.

Illiteracy is widespread in The Gambia, so voters cast their ballot by dropping a marble into a tub marked with their candidate’s colour and photo — a practice dating back to the country’s past as a British colony.

Many of the roughly one million eligible voters in the nation of more than two million people are hoping for an improvement in their living standards.

The Gambia, a sliver of land about 480 kilometres (300 miles) long, which is surrounded by Senegal, is one of the poorest countries in the world.

About half of the population live on less than $1.90 per day, the World Bank says.

The tourism-dependent economy was also dealt a severe blow by the Covid-19 pandemic.

Barrow is running on a continuity ticket, pointing to infrastructure projects completed under his watch, as well as increased civil liberties.

Political veteran Ousainou Darboe is considered by observers to be the leading opposition candidate.

The 73-year-old is a lawyer who has represented opponents of Jammeh, and who ran for president against the former dictator several times.

He also served as foreign minister and then vice president under Barrow, before stepping down in 2019.

International observers will be watching closely for whether the losing candidates accept defeat, one senior diplomat said on condition of anonymity, calling it a “critical moment” for Gambian democracy.

Jammeh lost to Barrow in the 2016 election but was only finally removed by military intervention from other west African states.

Barrow himself has already gone back on a promise to remain in power for only three years and has weakened rhetoric about prosecutions for crimes committed under Jammeh.

Questions over Jammeh’s continuing role in politics, and his possible return from exile, have been central themes in the run-up to the election.

In September, Barrow’s NPP party announced a pact with Jammeh’s APRC — a controversial move that was viewed as an electoral ploy.

Jammeh said the decision had been taken without his knowledge, and his supporters have formed a rival party. But rights groups fear the pact will diminish chances of a trial.

The 56-year-old former dictator retains significant political support in The Gambia and has sought to influence the vote, remotely addressing rallies of supporters during the campaign period.

After coming to office, Barrow set up a truth commission to probe alleged abuses under Jammeh’s rule.

Before hearings ended in May, it heard testimony from hundreds of witnesses about state-sanctioned death squads, witch hunts, and forcing bogus cures on AIDS patients.

The commission recommended in November the government pursue criminal charges, in a final report delivered to Barrow but not released to the public.

The names of the officials against whom charges were recommended were also not released.

But rights groups said “there is no doubt that Yahya Jammeh was at the top of that list”.

2023: Why Igbos may never produce president of Nigeria – Bishop Azubuike