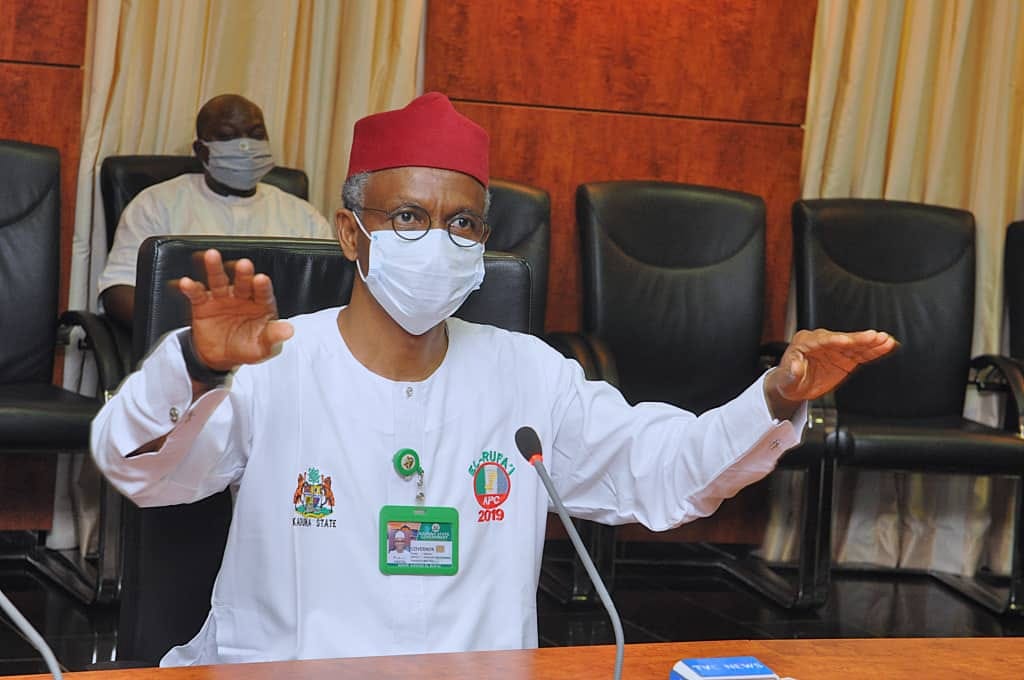 The Governor of Kaduna State, Mallam Nasir El-Rufai, has called on the Federal Government to immediately implement three specific recommendations of the All Progressives Congress Committee on True Federalism to address the insecurity in the country.

El-Rufai, who was one of the speakers on a live broadcast tagged ‘The Fierce Urgency of Now: Tactics and Strategies to Pull Nigeria from the Brink,’ on Friday, stated that Nigeria had failed “jealously and consistently protect its prerogatives and status as a leviathan, the ultimate guarantor of security, the protector of rights and the promoter of the rule of law.”

According to him, that is why the Federal Government’s power is being challenged in a “frighteningly sustained manner” by a phalanx of armed non-state actors.

He said, “I would recommend the following immediate decisions and actions by the federal and state governments, with the support of our civil society and all well-meaning Nigerians. The first is to implement the three key devolution proposals that I mentioned: Give us state police now; vest all minerals in the states now; and decentralise our judiciary now – not later.

“There are certain things governors cannot do. Some of them we have alluded to by saying we don’t control security agencies. So, you are chief security officer, but you can call the CP (commissioner of police) and if the IG (Inspector General) says, ‘Don’t talk to him,’ that is it.

“In five and a half years, as governor of Kaduna State, I have had eight commissioners of police. They are just posted; they spend seven or eight months (each) on average. Do mathematics. Eight CPs that have virtually no say in their posting, and so on. How can you have security management if you change the frontline chief of security every eight months on average?”

The governor noted that only the National Assembly could make state police a reality.

El-Rufai added, “There is nothing the governors can do. And these senators and House of Representatives members were elected from states. Many of them got elected with our help and support, but when they go to Abuja, they can grow large heads and will not cut their hair for two years, and they start thinking something else. I had one like that; I got him out.

“We want states to have more responsibilities so that we can be held more accountable. The reason I said we need state police, a decentralised judiciary and the vesting of mines, minerals and oils in states now is that if we don’t do it this year, next year, everything will be politicised.”

In response, the Senate Minority Leader, Senator Enyinnaya, who was also a speaker on the occasion, said, “Governor El-Rufai has said, ‘Let us all work together.’ We are very ready to do that.”

Speaking on the causes for failure ineffective policing, El-Rufai stated that the national level security response to the challenges has been uncoordinated and ineffective in wiping out the threats.

He said, “None of the military services nor other security agencies has been suitably expanded in numbers and equipment for over a decade since the insurgency in the North-East pushed things to a new law.

“This country does not have enough soldiers, uniformed police, or secret police to project state power across its vast swaths, particularly the forests. The limited number of boots on the ground are not well-equipped and are significantly lacking in the technology that can make their limited numbers matter a lot less.

“We should provide immediate and enhanced funding to acquire advanced equipment, armaments and ordinances for the armed forces, police, security agencies and paramilitary agencies by drawing down from the pool of various rainy day federation funds like the Excess Crude Account, Natural Resources Account, Stabilisation Account, and so on so that our security services will have the material to face the criminals that menace us. “

The governor added that restructuring required an immediate national consensus to collect more taxes at federal and state levels for the governments to be viable.

“This also means we must stop pretending that the regulated rates of lending, interest rates, exchange rates, prices of petrol and electricity, as well as the salaries in the public sector are realistic, sustainable and will lead us to the Promised Land. These are decisions for the here and now,” he said.

The Governor of Ekiti State and Chairman of the Nigeria Governors’ Forum, Dr Kayode Fayemi, in his speech, highlighted the importance of compassion among political leaders in the country.

He said, “For us at the level of the governors, we have been dealing with immediate issues that go beyond generic points that have been made eloquently by Mallam Nasir El-Rufai. When you focus on the recent challenges, be they banditry, insurgency or, most recently, the herder-farmer conflict that we have experienced in the South-West, what is clear is that, naturally, victims are almost always emotional about issues of this nature.

“When you have lost somebody or you know someone who has lost someone, it’s no use telling the person to be rational about the ill that has befallen them and the bereavement they’ve suffered. The truth of the matter is that we also need compassionate leadership in order to help deal with these issues, in addition to all the substantive things we need to deal with.”