HomeSportsGlory And Gloom For Nigerian Clubs In CAF Confederation Cup

Glory And Gloom For Nigerian Clubs In CAF Confederation Cup 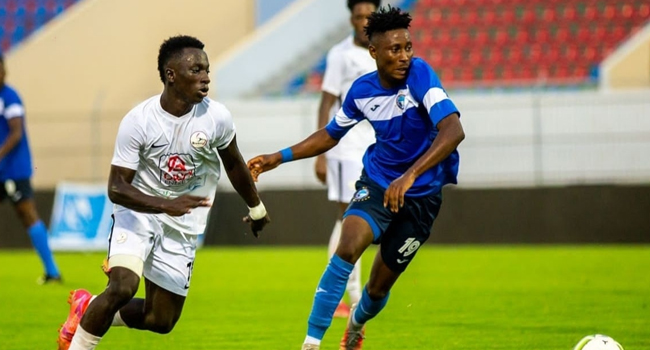 There was glory and gloom for Nigerian clubs in CAF Confederation Cup last-32 qualifying with Finidi George’s Enyimba cruising to victory on Sunday, a day after Bayelsa United were humiliated.

Enyimba outclassed Diambars, an academy outfit with links to the French Ligue 1, 3-0 in Aba after taking the lead within two minutes through Tosin Omoyele.

Victor Mbaoma doubled the lead before half-time in southeastern Nigeria and Samuel Kalu completed the rout in the final minute for a 4-0 aggregate triumph.

Former Nigeria World Cup star George recently took charge of the most successful Nigerian club in African competitions with two victories in each of the Champions League and the Super Cup.

But the last of those titles came in 2005, leaving football followers in the most populous African country longing for more CAF silverware.

Enyimba, popularly known as the Peoples Elephant, reached the Confederation Cup semi-finals in 2018 and the quarter-finals in 2020 and 2021.

“This club is a sleeping giant in Africa and it is time to win CAF competitions again,” said 1994 and 1998 World Cup midfielder George after his recent appointment.

Victory over Diambars takes Enyimba into a home-and-away play-off against a CAF Champions League last-32 loser during November and December with the draw date to be announced.

Sfaxien, who trailed 1-0 after the first leg last weekend, advanced 4-1 on aggregate and are among the favourites to win the African equivalent of the UEFA Europa League.

Another second-division team fared more successfully than Bayelsa with Malian minnows Binga scoring a late goal to beat hosts ASFA Yennenga of Burkina Faso 1-0 and then winning 7-6 on penalties.

Siaka Diaby notched the 85th-minute winner in a west African showdown played in the Ivory Coast because Burkina Faso does not have an international standard stadium.

JS Kabylie, the Algerian club who finished runners-up to Raja Casablanca in 2021 final, eliminated another Moroccan club, AS FAR, after Ali Haroun scored twice in a 2-1 home win.

The high-profile North African clash hung in the balance until the fourth minute of added time when Haroun netted a second time to seal a 3-1 overall triumph.