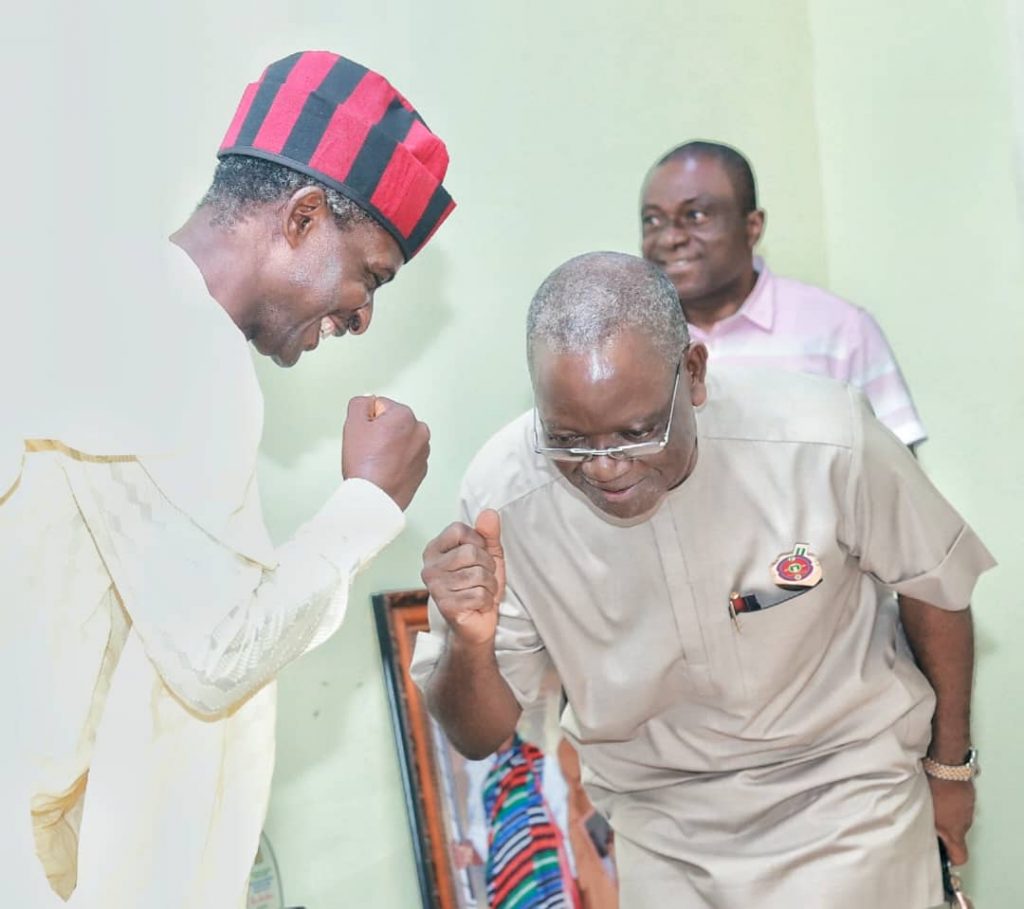 Benue State Governor, Samuel Ortom, has congratulated the Och’Idoma-elect, Pastor John Elaigwu Odogbo, on his election as the 5th paramount ruler of the Idoma Nation.

Governor Ortom on Thursday, December 30, 2021 at the Benue Peoples House Makurdi, received the Och’Idoma-elect when the latter was presented to him by the selection committee, led by Commissioner for Housing, Chief Ekpe Ogbu.

The Governor prayed God to provide anointing on the new paramount ruler to be able to discharge his duties effectively, even as he pledged sustained support of his administration to the traditional institution.

He also pledged his administration’s commitment to justice, fairness and equity at all times, stressing that as someone who comes from one of the least communities in the state, he will always allow God’s will to prevail.

The Governor also congratulated the selection committee, kingmakers and all stakeholders who played key roles in the emergence of the new Och’Idoma.

Governor Ortom said soon after the coronation of the new Och’Idoma, the Benue State Council of Traditional Rulers will be inaugurated for effective administration of the traditional institution in the state.

In a remark, the Och’Idoma-elect, Pastor John Elaigwu Odogbo pledged not to betray the confidence reposed in him through his selection.

Team leader of the selection committee, Chief Ekpe Ogbu while presenting the Och’Idoma-elect to the Governor said the election was transparent and peaceful.

He explained that out of the three contestants that went to the final stage, the Och’Idoma-elect polled a total of 19 votes to defeat his closest rival, Arc. Sunday Echono, Permanent Secretary, Federal Ministry of Education who scored 8 votes while Andrew Idakwu got one vote out of the overall 28 votes cast.

The Och’Idoma-elect, who is of the Deeper Life Christian denomination was born on March 27th,1969 as the 5th born to the family of Mr. Elaigwu Ekoja in Obagaji the headquarters of Agatu local government area of Benue State.

The new Och’Idoma graduated from Ahmadu Bello University Zaria in 1994 with a B.Sc in Accounting and a
Masters in Business Administration from Benue State University in 2012.

In 2015, the new Och’Idoma also obtained a Post Graduate Diploma in Education from the National Teachers Institute as well as an M.Sc in Accounting and Finance from the Nasarawa State University, Keffi and Doctor of Philosophy in Accounting from the same University.

He is a Fellow of Chartered Institute of Taxation of Nigeria (FCITN), Fellow Certified National Accountants of Nigeria, (FCNA), 2002 and also an associate member of the Nigeria Institute of Management, NIM.

Comrade Pst Elaigwu worked with Federal Inland Revenue Service, FIRS for 23 years and rose to the position of Assistant Director.

He also held many positions in the organisation one of which included Chairman, Association of Senior Civil Servants of Nigeria for two terms from 2004 to 2012.

He also served as National Exofficio of the same association from 2012 to July, 2018.

His Royal Majesty Elaigwu comes to the traditional institution as an erudite trainer (resource person in FIRS) and a thorough professional with vast experience in taxation and Accounting through International training and development.