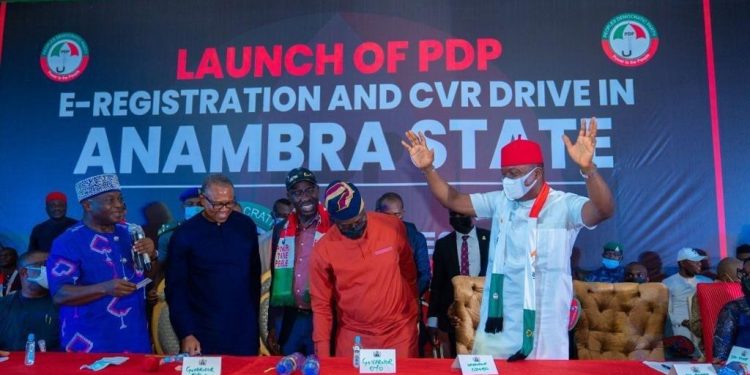 The Peoples Democratic Party (PDP) has continued to demonstrate the party’s resolution on the 2021 Anambra governorship election as Governor Godwin Obaseki of Edo State led a delegation of top party leaders, including Governor Seyi Makinde of Oyo State and Governor Okezie Ikpeazu of Abia State, to launch the PDP e-registration and Continuos Voter Registration (CRV) drive in the southeastern state.

The event, held on Tuesday, August 31, at the Oma Event Center, Awka, witnessed Governor Obaseki and other party leaders express readiness to champion the campaign of the party’s governorship candidate, Valentine Ozigbo.

Other top shots at the event were the Chairperson of the Anambra State PDP Governorship Campaign Council, Senator Uche Ekwunife; former Anambra Governor Peter Obi, who is the 2019 Vice Presidential Candidate of the PDP; a PDP National Executive Committee member, Chief Okey Muo-Aroh; the National Organising Secretary of the PDP, Col. Austin Akobundu; and the National Publicity Secretary of the PDP, Mr Kola Ologbondiyan; Mr Oseloka Obaze, the 2017 PDP governorship candidate; members of the Anambra State House of Assembly; and many others.

The Chairman of the PDP e-registration committee, Governor Obaseki, said the choice of Anambra to flag off the e-registration drive is symbolic because it shows the party’s seriousness to win the coming election.

“We are here on an important mission. Anambra is the first state we are doing this. The committee on e-registration deemed it fit that we start this exercise in Anambra. The crowd here shows we have a real party, so I am both happy and encouraged to be in your midst,” Governor Obaseki said.

“This is a bold step to rebuild our party, considering that our politics depends on the activities at the wards.

“This process will register you with the party and also with INEC. It is vital because it greatly reduces rigging as we can monitor election results and transmit them as soon as votes are counted.

“Registering with PDP is the lifeline that will help us stop the irregularities in government in Anambra in November and at the federal level in 2023.

“I am looking forward to Anambra’s election. We are projecting at least 250,000 new members so we can win by a landslide,” the Edo governor added.

In his address, Governor Makinde said he is invested in the Ka Anambra Chawapu project and would be visible in the electioneering process. The Oyo governor said the presence of governors from all the southern regions shows the unity of purpose within the party.

“I want to identify with the PDP in Anambra State, especially with the coming election. I am glad because I came from the South West, Governor Obaseki went from the South-South and Governor Ikpeazu from the South East. This means that the entire South of Nigeria is fully represented here.

“Don’t listen to detractors; we were on the ground in Edo, and it couldn’t be rigged, so expect me on the ground during your election,” Governor Makinde said to resounding cheers from the crowd.

Abia State’s Governor Okezie Ikpeazu, who is also the Chairman of the National PDP Campaign Council for the Anambra Election, said the PDP is demonstrating its determination to show Nigerians the way to go.

“We cannot remain analogous in a digital world. I am a product of women, and youth mobilisation and our plan for Anambra is to win at the polling units and follow up the results at the ward, local government and state collation centres,” Governor Ikpeazu remarked.

“We must take our destinies into our hands by coming out en masse to register in our various wards. Registration is straightforward and can be done anywhere. This is no time to stand on the fence if you are truly tired of the status quo.

“I do not doubt that if leaders take up the responsibility and mobilise followers in their units, I am sure that we will win. It’s not about Valentine Ozigbo, but about us. Ndi Igbo have the numbers in every city in the country, so we must take advantage of this process.”