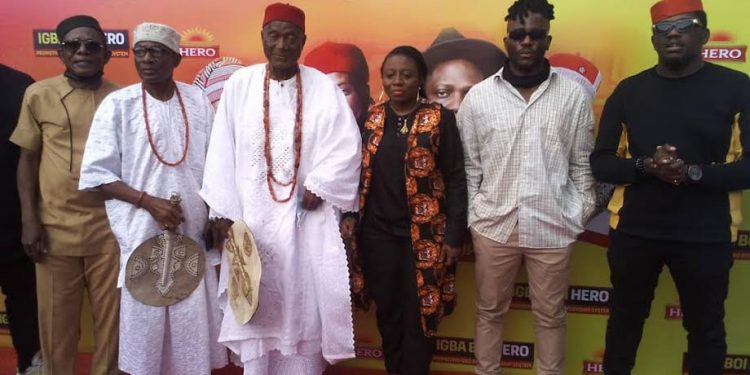 Premium lager, Hero has announced the “Igba Boi Tour”, a campaign targeted at Igbo Apprentices who are in their final year of graduation from the Igba Boi scheme with 50-million-naira worth of seed capital, mentorship, and business grants.

The campaign which was announced at a press conference to kick-off activities in Onitsha was attended by Igbo dignitaries and businessmen, community stakeholders, top officials of International Breweries Plc and pressmen.

The Igba Boi Tour will transverse six main markets in the cities of Onitsha, Awka, Enugu, Owerri, Aba and Lagos. The tour will see Hero Lager extending a hand of support to Igbo apprentices who are on the verge of attaining independence through mentorship, seed capital grant, and business advisory.

Speaking on the decision to launch the campaign, the Marketing Director, International Breweries Plc, Tolulope Adedeji, explained that the Igba Boi Campaign Tour is a follow up to the current brand campaign, Aha Gi Efula and Hero’s Walk documentary which tells the story of the Igbo apprenticeship system and has now been viewed by over one million people on YouTube.

‘Through the Aha Gi Efula (May Your Name Never Be Lost) campaign, we inspired consumers of Hero to aspire for success and encouraged them to strive to leave lasting legacies. The campaign also served as a reminder and boost to the courage, resilience, hard work, and persistent nature of Nigeria’s young men and women. With the Igba Boi Campaign, we are going one step further to entrench the Igbo Apprenticeship culture by beaming the spotlight on the apprentices, “Umu Bois” without whom the culture would cease to exist; by catalysing their journey to independence and entrepreneurship success through mentorship, the award of grants, and business advisory,’ Adedeji said.

A rigorous selection process will follow the collection of entries to ensure that only those who have a maximum of six months left to serve and have proven to be worthy trainees over the years are selected.

‘Over 300 apprentices across the six markets will receive a 2-day training and mentorship programme, business name registration with the Corporate Affairs Commission, business account opening and also participate in a grant worth 50 million naira to kickstart their entrepreneurship journey,” she said.

The Igba Boi campaign will run from September to December and is only open to individuals who are 18 years and over.

Hero Premium Lager is a product of International Breweries, a member of the world’s biggest brewer, AB InBev.

International Breweries has over the years supported the growth of entrepreneurship in the country, having invested close to half a billion naira, since 2016, in its Kickstart programme, a social investment scheme that is geared towards empowering youth entrepreneurs with grants, training and mentorship, all with the aim of supporting employment generation and reduction of poverty in Nigeria.