HomeNIGERIA“Hold Gov. Umahi responsible if anything happens to me” – Ebonyi University ASUU Chairman

“Hold Gov. Umahi responsible if anything happens to me” – Ebonyi University ASUU Chairman 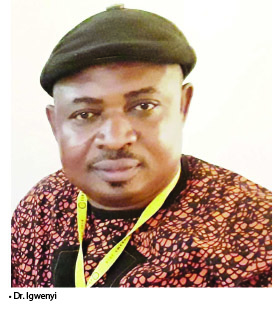 Igwenyi was reacting to an alleged directive by Umahi to the people of Ohaozara to raise a Thousand youths to occupy his home and ostracize him from his Community, Okposi.

The Governor allegedly gave the directive when Ohaozara stakeholders paid a Christmas visit the Governor at his country home in Uburu on the 28th of December, 2020

The stakeholders who were in Uburu to thank the Governor for what they said were “his various achievements and defection to the APC”.

According to sources at the 28th of December visit, while responding to the stakeholders the Governor “spent time instigating the people against the Acting Chairman of ASUU, EBSU Chapter, Comrade Ikechuku O. Igwenyi”.

The Governor allegedly
claimed “Comrade Igwenyi is playing double standards and must be made to leave the University by all means as he was the reason for the absence of peace in EBSU”.

According to those at meeting the Governor “maintained that any perceived opposition should be beaten to unconsciousness and handed over to security agencies”, while urging Traditional Rulers from the area to initiate plans to ostracize the Igwenyi family from their ancestral home in  Okposi should he (Igwenyi) fail to resign as ASUU Chairperson.

In a WhatsApp post, circulated to colleagues and contacts on the afternoon of 31st of December Igwenyi alleged “Finally, my home in Okposi and Abakaliki have been occupied by youths.
Let the world hear me.
I have not offended anybody and I have not been told what I did.
I posted this to Okposi Forum for my people to ask questions and save my family”.

Igwenyi further called on security agencies and well meaning citizens of Ebonyi State to intervene and call Governor Umahi to order and save his life.

Refusal to be part of the agreement reached between the DMPs and the Government, which include among others:
a). Agreement that workers be paid at least 80% salary for 4 to 12 months without negotiation with the workers.
b). Agree on the decision of EBSU Management to implement the recommendation of the last staff audit of 2018, implying that those sacked and granted Executive State pardon be sacked again.
c). Agree to withdraw the ASUU EBSU Branch from the National body.
d). Agree that staff strength be cut down and workers laid off without benefits.
e). Accept that staff who are sick due to forced labour, stress, mental torture, hunger and are unable to take care of their health bills be sacked without benefits as a result of Medical Board Report.
f). Call-off or suspend the national strike in the Branch.
g). Refusal to resign and leave EBSU for “peace to reign”
As at the time of this report, it is not clear whether the youths have vacated the Igwenyi compounds in Abakaliki and Okposi.