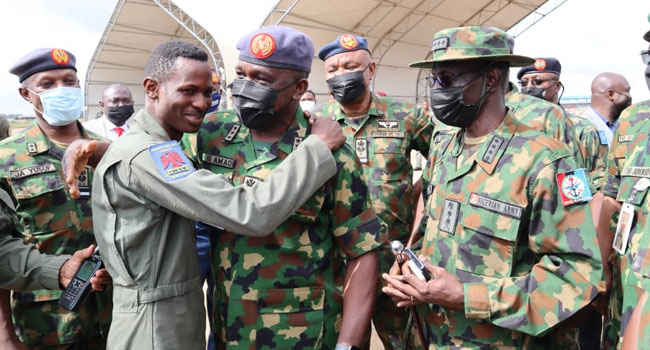 The pilot had finished a raid against kidnappers when he came under intense fire, the Air Force spokesman, Edward Gabkwet, said in a statement on Monday.

Flight Lieutenant Dairo was able to elude several bandits’ strongholds by using the cover of darkness and his phone set for navigation and maneuvered his way to a Nigerian Army Unit, where he was finally rescued.

Reacting in a statement issued on Tuesday by the presidential spokesman, Garba Shehu, President Buhari said he was pained by the news of the air crash.

“I was shocked by the devastating news of the air crash but felt much relieved, following the successful ejection by the pilot and his eventual rescue. May the injured pilot recover at the earliest time,” President Buhari was quoted as saying.

Shehu said President Buhari had been briefed on the successful operation by the nation’s defence forces to rescue the pilot, few days after armed bandits gunned down the military aircraft.

The attack happened on the border of the northern Zamfara and Kaduna states.

Armed gangs – referred to locally as “bandits” – have been blamed for a spate of recent kidnappings in this part of north-western Nigeria.

Students and schoolchildren have been targeted – more than 1,000 have been kidnapped since December. Most have since been freed, reportedly after ransoms were paid, but some have been killed.

In recent days, President Muhammadu Buhari has directed the military to do all it takes to flush out criminals in the states of Katsina, Zamfara and Kaduna.