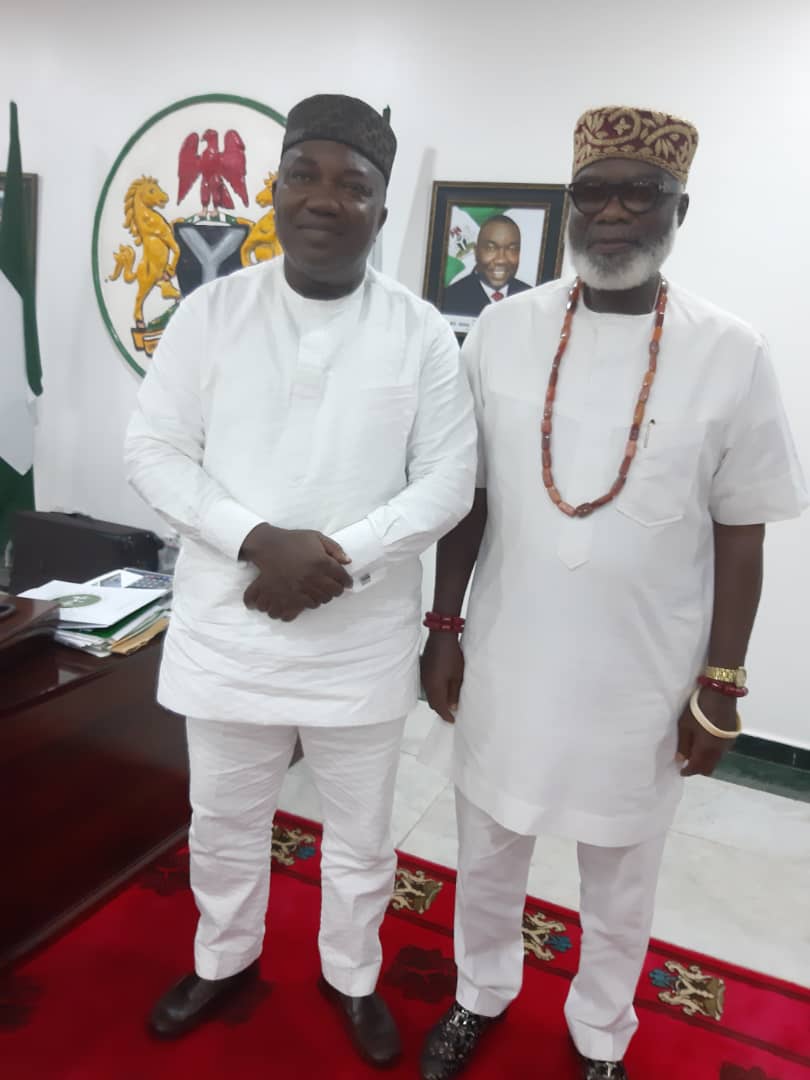 Igwe Sunday Orah was fielding questions from newsmen who visited his Palace recently.
According to the Royal Father, “a close examination of activities in various departments of government would leave no one in doubt about the disposition of His Excellency to continue his uninterrupted service to the people.”
“I have not seen him blink or waver. The story is all about projects here and there,” he noted.

Igwe Orah was particularly enthused about the Security Situation in Enugu State.

He said: “I am particularly delighted with the Security Architecture here.
In fact, this government has excelled, to such a commendable level that neighbouring State governments are coming here to copy the initiative. The initiative is to say the least, superlative.”

“Apart from the conventional security outfits like the Police, the Civil Defense that are trying their best, the concept of Enugu State Forest Guards, Neighbourhood Watch and Vigilante Group are welcome.
“I believe the people are enjoying their services.

“Nothing could be so dear to the hearts of the people.” Igwe Sunday Orah stated with elation.

He noted that for some time, Enugu had become the hub of economic activities and made reference to the influx of entrepreneurs to the Coal City.
“He (the Governor) wants people to come here and invest, sleep and return to their base and tell the story; the Enugu good story.

“When you are dealing with a Governor who guarantees you security, who is determined to protect lives, public and private investments, you can start counting your blessings,” Igwe Sunday Orah said.

“So, I admire His Excellency a lot for making the issue of security a priority and primary assignment.”

Orah spoke about the Oji-Achi section of the highway to Awgu from Oji-River.
” This federal road is a total embarrassment to Oji-River people,” he lamented.
“Contracts have been awarded several times for the rehabilitation of this road; and several times the job was abandoned, and yet we have representatives at the House of Representatives, in the Senate and other places.”

The Ezeabata of Adu Achi recalled with a sense of disappointment that such an important road, designated ‘Trunk A’ highway as far back as 1952 during the colonial days was still suffering neglect.

Sunday Orah posed some questions to express his misgivings about the jinxed Oji-River Achi- Awgu road.

The Royal Father hinted that the affected communities were planning to take up the matter with the Governor, The Rt. Hon. Ifeanyi Ugwuanyi.

Ezeabata argued: “Even though the road in question is a federal road, we believe that the Governor can intervene and make the road what it should be, because the stress is becoming unbearable.”

“It is only Gburugburu that can be of assistance to us over this ill treatment that has lasted for several decades,” he stated.

The Adu Achi Royal Father also made a case for the Onitsha-Enugu express road between the Ekulu bridge and the 82 Div. Nigerian Army.
“The road has become a nightmare to motorists. Government can approach and rehabilitate the highway through Direct Labour.” Orah advised.

On the relationship between the government and the traditional institution, Igwe Sunday Orah snapped: “Very impressive.”
“Ugwuanyi has elevated the Royal Fathers. He attends to the their needs for the benefit of our various communities. Of course, that is why there is peace and tranquility everywhere in Enugu State.

Interview by Amah Baldwin at Achi

Obi Chinbueze, Abuja. Transaction on the floor of

Writers Association call for total overhaul of the Ministry of Culture