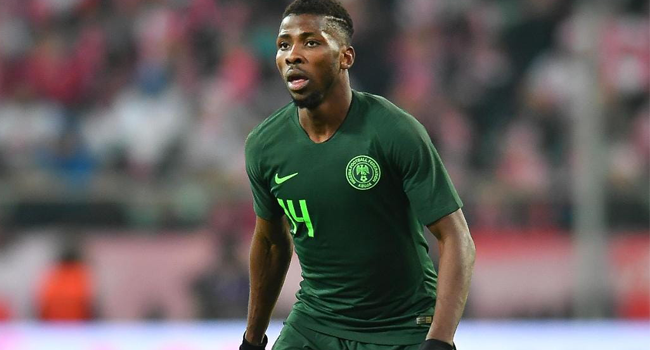 He struck after 21 and 45 minutes for a nation that has competed at six of the last seven World Cup tournaments, without ever getting past the second round.

Both goals in the Nigerian economic capital were set up by another English Premier League star, Everton midfielder Alex Iwobi.

Nigeria were among the luckier teams in the African group draw, being paired with Cape Verde, the Central African Republic and Liberia.

Only Cape Verde, who drew away to the Central African Republic two days ago and host Nigeria on Tuesday, are expected to mount a serious challenge to the three-time African champions in Group C.

Iheanacho and eight other Britain-based Nigerians cannot travel to Cape Verde because the island state is on the United Kingdom coronavirus “red list”.

Any footballer returning to Britain from a red-listed country must quarantine for 10 days, and Premier League and Football League players have been barred from visiting such nations.

Germany-born Nigeria coach Gernot Rohr insists all three rivals are “tricky opponents who we have got to be at our best against”.

“The job has been done,” he said, referring to the win over Liberia. “We had to win our first game at home and we did not concede a goal.

“We will be without nine players (in Cape Verde) — that means it will be another team and it is not easy to build a new team within days.

“We will also play on a synthetic pitch. This will be a challenge. It will be more difficult than against Liberia.”

Meanwhile, South Africa drew 0-0 away to Zimbabwe in a scrappy Group G match that marked the debut of Belgian Hugo Broos as coach of underperforming Bafana Bafana (The Boys).

South Africa will be notable absentees from the Africa Cup of Nations in Cameroon in January having finished only third in a group from which Ghana and Sudan qualified.

They face Ghana again in the World Cup and, judged by the performance in Harare, are unlikely to finish above the West Africans.

South Africa threatened to score only twice — when a Teboho Mokoena shot was brilliantly fisted away by goalkeeper Talbert Shumba and when a goal-bound Bongokuhle Hlongwane shot was cleared.

Zimbabwe were even less dangerous, worrying South African goalkeeper Ronwen Williams just once as Khama Billiat unleashed a close-range drive that was tipped over.

Zambia, another team that failed to secure a place at the upcoming Cup of Nations, made an impressive Group B debut by winning 2-1 in Mauritania.

Enock Mpewu and Prince Mumba scored either side of half-time for the Chipolopolo (Copper Bullets) in Nouakchott before Mamadou Niass halved the deficit.

Tunisia lead Zambia on goal difference after Dylan Bronn, Ellyes Skhiri and captain Wahbi Khazri scored in the second half to deliver a 3-0 victory over Equatorial Guinea in Rades.

Cameroon, whose seven World Cup appearances is an African record, began their Group D campaign by beating Malawi 209 in Yaounde through goals from Vincent Aboubakar and Michael Ngadeu-Ngadjui.

In the same section, an Ivory Coast side lacking many first choices because opponents Mozambique are on the British “red list” drew 0-0 in Maputo, where Max Gradel came closest to scoring off a free-kick.

Saturday is a World Cup rest day in Africa and the 20-fixture second round kicks off on Sunday and lasts three days.