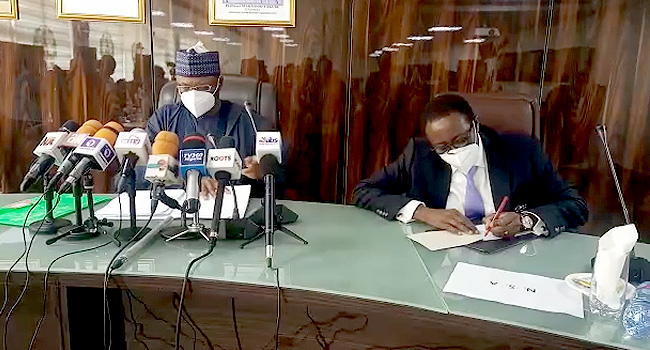 The Chairman of the Independent National Electoral Commission (INEC) Professor Mahmood Yakubu has held an emergency meeting on election security with heads of security agencies at the INEC headquarters in Abuja.

The meeting comes on the heels of recent attacks on INEC facilities in Ebonyi, and some other states.

In attendance at the meeting was the  National Security Adviser Babagana Mongunu, the Director-General National Intelligence Agency Ahmed Abubakar, the Acting Chairman of Economic and Financial Crimes Commission (EFCC), Abdulrasheed Bawa, the acting Inspector General of the Police Alkali Usman.

Also in attendance were the representatives of the Chief of Defense Staff, as well as heads of the paramilitaries.

The NSA is the co-chair of the INEC inter-agencies elections security Committee.

The Chairman of INEC underscored the reason why this emergency security meeting is convened.

Before the commencement of the meeting, one minute of silence in honour of the late Chief of Army Staff Ibrahim Attahiru and those who died along with him during the ill-fated crash last Friday in Kaduna state.

Let Us Not Deceive Ourselves, Things Are Not Alright – Sultan Abubakar