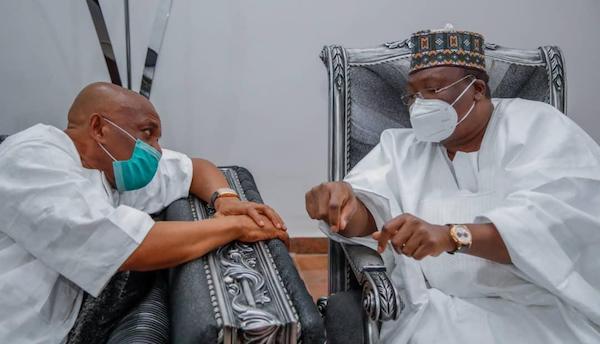 Former Governor of Abia State and Chief Whip of the Senate Dr Orji Kalu has described the Senate President, Senator Ahmad Lawan, as a patriotic statesman and compassionate politician.

Kalu, acknowledging the contributions of the Senate President to the growth and development of Nigeria, stressed that the celebrant is a strong advocate of democracy.

The Senate Chief Whip extended his greetings to family, friends and political associates of the Senate President, adding that the celebrant has consistently demonstrated selflessness, patriotism and generosity in all his endeavours.

In a goodwill message, Kalu prayed for a longer life for the celebrant, noting that the Senate President deserves commendation for complementing the efforts of President Muhammadu Buhari in repositioning the country.

‘On behalf of the people of Abia North Senatorial District, I congratulate the President of the Senate, Senator Ahmad Lawan on the occasion of his 63rd birthday anniversary,’ Kalu stated.

‘The Senate President is an accomplished statesman, consummate politician and philanthropist of repute.

‘He has been complementing the efforts of the President in building a prosperous and united Nigeria.

‘The Senate President has sustained his large followership in the political space in view of his outstanding leadership attributes anchored on probity, transparency and accountability.

‘In his current capacity, the Senate President has been a rallying point for his colleagues and contemporaries.

‘The celebrant deserves commendation for advancing the cause of the people.’

Kalu prayed to Allah to strengthen the celebrant in his pursuits.

FCTA: Unvaccinated Workers Won’t Be Allowed into Office from Jan. 17